Thich Nhat Hanh’s 94th birthday—or continuation day—is Oct 11. In honor of the day, Plum Village monastics asked his friends and students to share short reflections on how Thay, as his followers call him, has touched their lives. Plum Village’s “birthday gift” serves the dual purpose of celebrating Thay’s influence and providing a picture of his future legacy.

After he crafted the 14 precepts of Engaged Buddhism in the context of the Vietnam War, Thich Nhat Hanh’s exile from Vietnam helped expand his influence globally. Countless people, including myself, have been introduced to Buddhism—more specifically a socially engaged form of mindfulness—through his prolific writings. 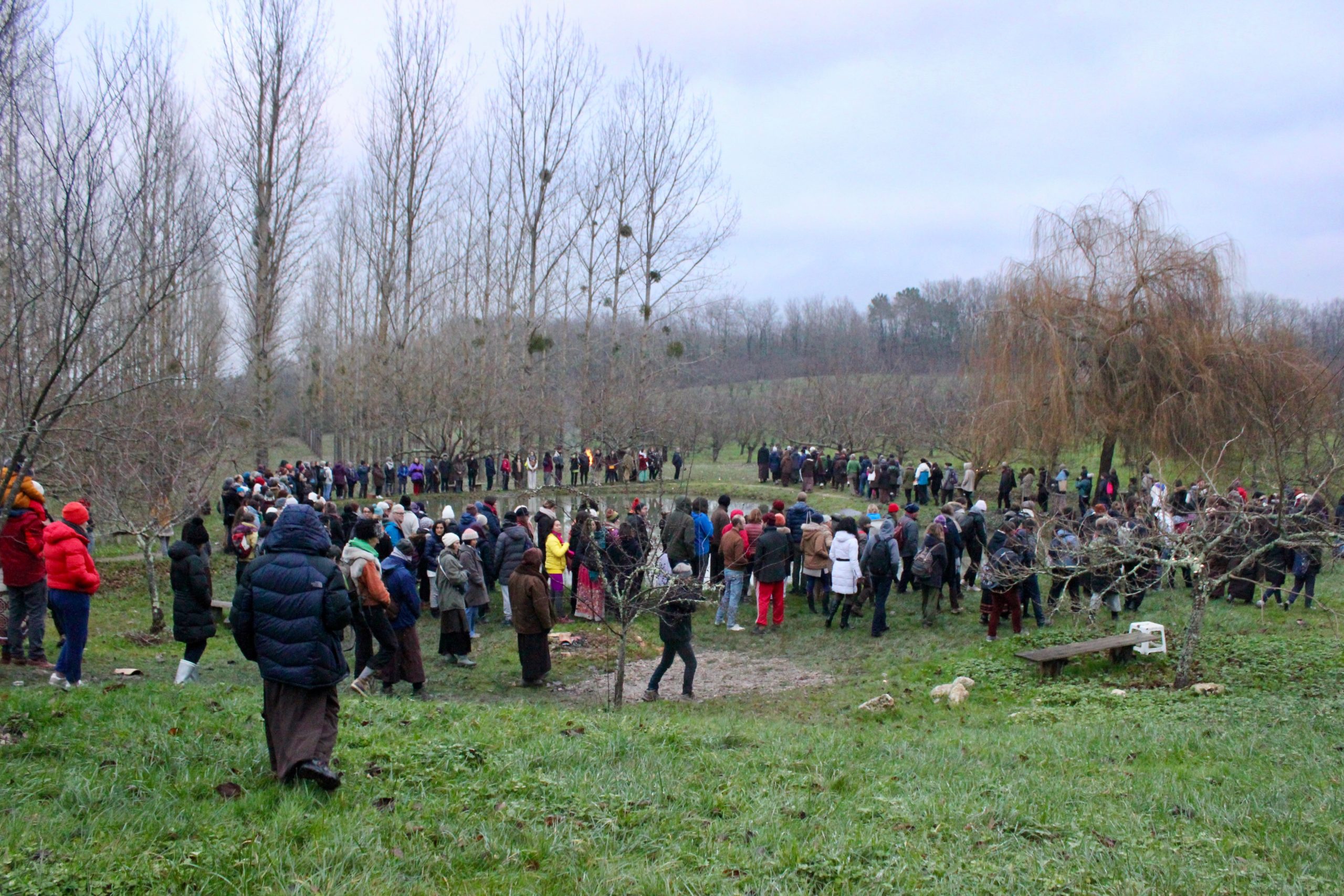 According to scholar Jeff Wilson, he counts more students than even the Dalai Lama. They include influential people in a wide range of fields.

Nhat Hanh has helped shape the environmental movement since the 1970s. Christiana Figueres, the lead negotiator for the Paris Climate Accords, found sustenance for her diplomacy work in his teachings. Climate activists who are part of Extinction Rebellion also take inspiration from him.

For people of color, Thich Nhat Hanh “stands as a beacon of light,” writes scholar and cultural critic bell hooks, another prominent student. Black Lives Matter co-founder Patrisse Cullors was introduced to the work of Thich Nhat Hanh as a young activist and has said that mindfulness techniques have been invaluable to her on both a personal level and as a movement organizer.

Thich Nhat Hanh and a select few others—such as the Dalai Lama—are globally known “spiritual exemplars.” CRCC has pursued a multi-year research project focused on such individuals and has defined the term as living individuals who advance human flourishing from a place of spiritual grounding. As some of our world’s most prominent exemplars age, one of the questions that has emerged through studying their lives is how their work in this lifetime will continue beyond them.

This question has become poignant following the death of Swami Agnivesh, a hugely influential figure in India. In one of his last interviews before he died, he told our journalist fellow, Soumya Shankar, that he did not see anybody continuing his work. “I have seen that no prophet’s own children have truly taken their work forward,” he said.

I went to Plum Village before the pandemic with this very question in mind. I was pleased to find that Agnivesh’s prediction was untrue in this case. Thich Nhat Hanh continues to be a living exemplar, showing his followers how to deal with physical decline after he was silenced by a stroke six years ago. This period of “transition,” as the monastics refer to the past six years, has revealed one side of Thich Nhat Hanh’s spiritual genius: his ability to think beyond his lifetime. His monastic community and students are an extension of him, continuing his work in the world. 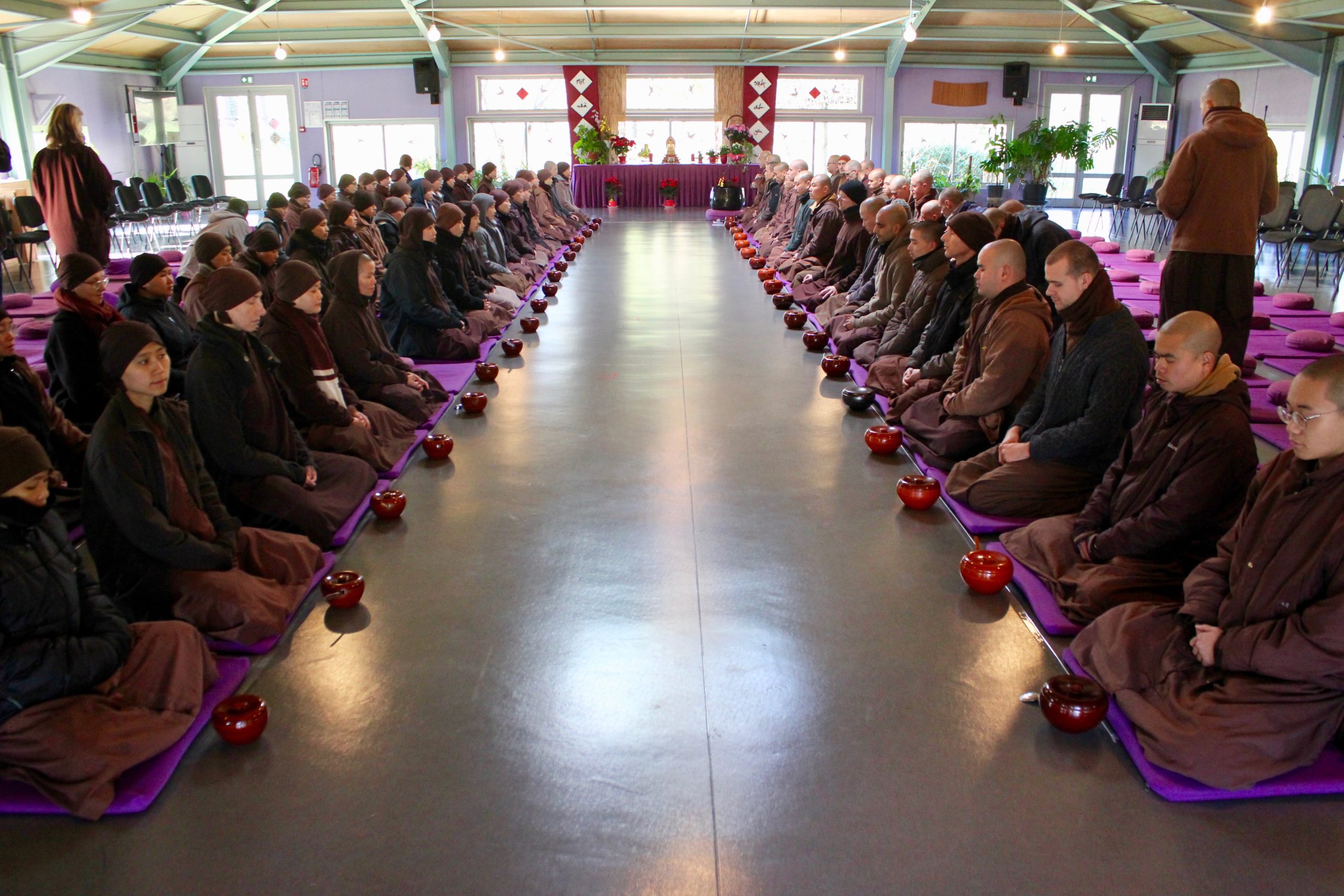 Thich Nhat Hanh’s monastics sit in order of seniority for a formal lunch in a meditation hall at Plum Village.

For years, his Order of Interbeing included only the few people who took on the precepts of Engaged Buddhism during the Vietnam War. Since he opened up the order in 1981, thousands of laypeople have taken on those precepts. He also founded a more traditional monastic order. Without the burden of jobs and families, more than 800 monastics dedicate themselves to practicing and passing on his teachings.

When I went to Dreamforce to see some of those monastics in action, I overheard a participant say, “They sound a lot like their teacher.” Indeed, at Plum Village, I heard monastics repeat metaphors from Thich Nhat Hanh in their Dharma talks.

When he was able to, Thich Nhat Hanh set the direction for the Plum Village community. Sister True Dedication, for instance, recalled when he declared the community vegan for environmental reasons. She remembers it vividly because she had just joined the monastic order, and her diet consisted of a lot of yogurt and cheese. He provided detailed direction, she said, down to the use of a proper word on a website. He was trying to teach his monastic students the spirit of the tradition so they could one day make the decisions on their own, she explained.

Now, the loose leadership structure is more democratic. His various monastic communities around the world have abbots, but no one person is in charge. Rather, councils of elders and bhikkhu/bhikkuni (monks/nuns) make decisions by consensus, with the monastics serving as a check on one another.

Thich Nhat Hanh also instructed his monastics to update the wording of the precepts to continue to be relevant to the times. For example, the five mindfulness trainings—which are a modern take on the precepts that lay Buddhists have taken for centuries—talk about not contributing to climate change. He did not want his teaching to become stagnant.

Six years after he was silenced by his stroke, his teachings remain as powerful as ever. Young people who never met Thich Nhat Hanh continue to join the monastic community. At the beginning of the pandemic, 90,000 tuned into “In the Footsteps of Thich Nhat Hanh,” an online summit hosted by Lion’s Roar. The monastics told me that in normal times, the number of retreatants is higher now that they were when Thay was teaching himself. Many of the retreatants I spoke to in January said they came after reading one of his books. 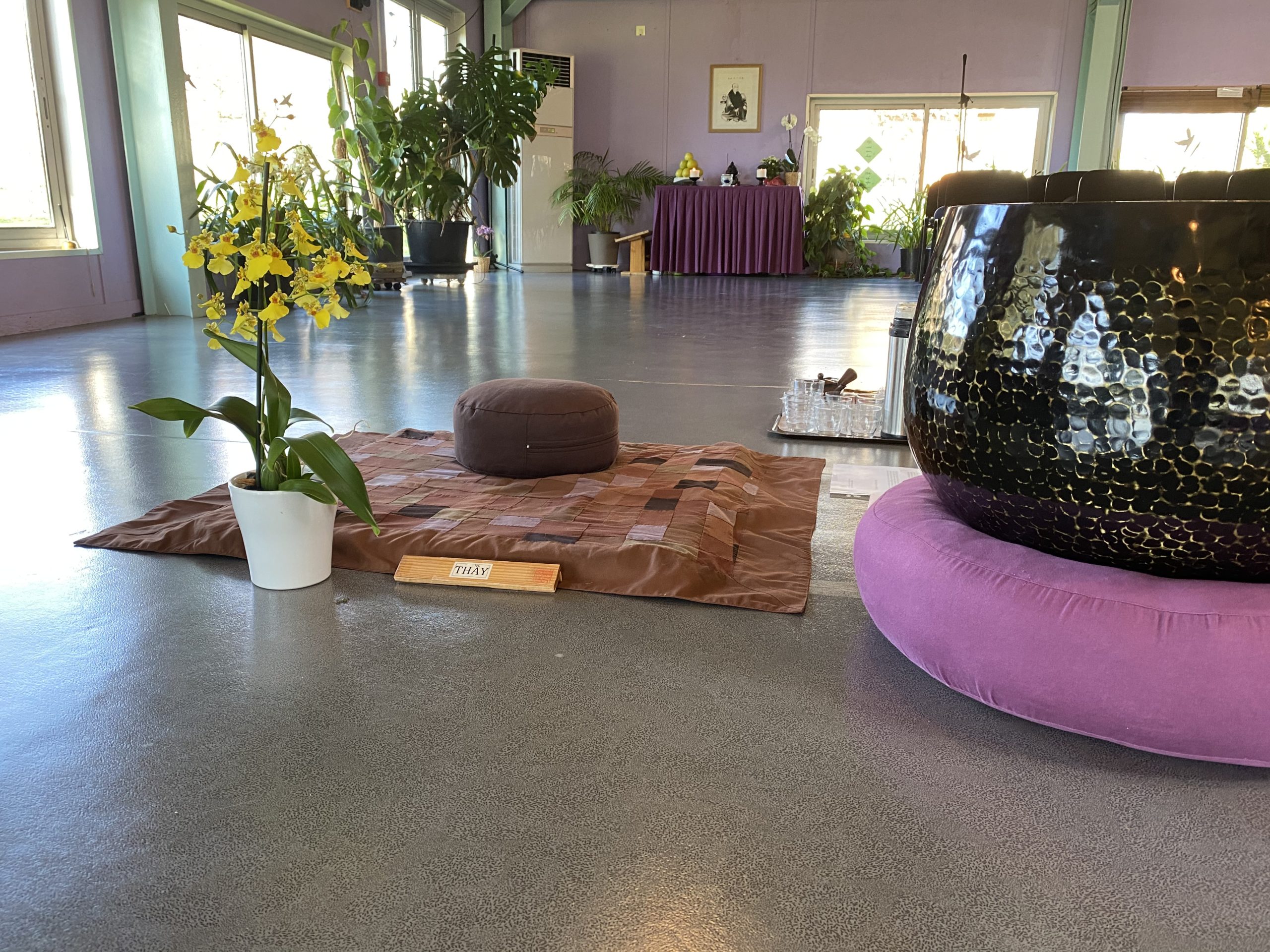 Meditation mat reserved Thich Nhat Hanh at the front of the meditation hall.

In the dining hall at Plum Village, Thich Nhat Hanh still “sits” at the head of the table—in the form of a picture surrounded by flowers and fruits. A mat with his name remained at the front of the meditation hall for a formal lunch. When the abbot shared that a tree had been planted by Thich Nhat Hanh himself, retreatants approached and placed a hand on the tree, seeking to connect with the extraordinary man. 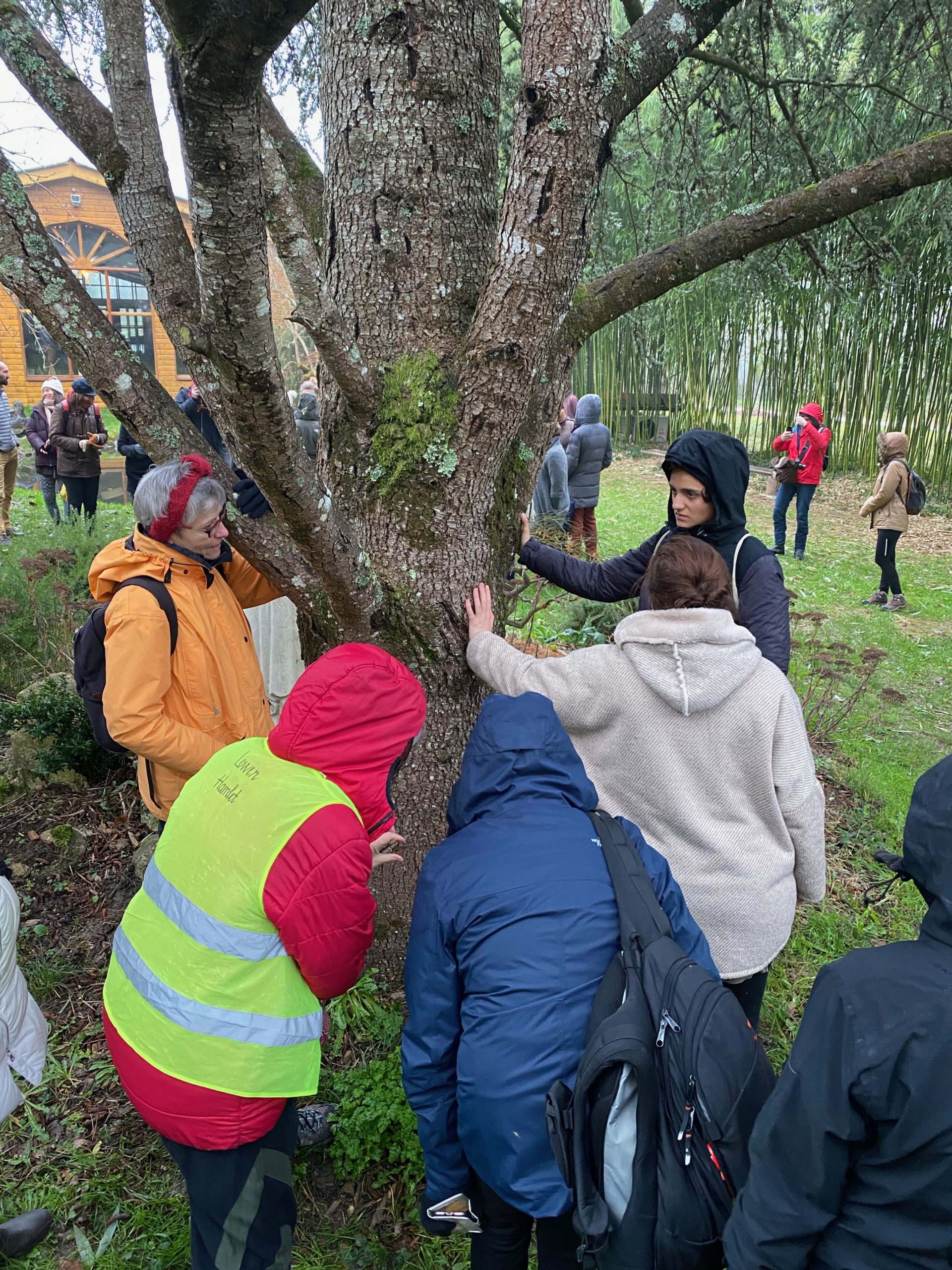 Thich Nhat Hanh, however, told his community that he did not want them to build him a stupa (shrine for his remains), according to Brother Phap Dung, one of the teachers I interviewed. But if they did build one, they should add three signs on it:

“I am not out there either.”

“If I am anywhere, it is in your mindful breathing and in your peaceful steps.”

This is perhaps true of all spiritual exemplars: Their legacy is in the countless individuals they have touched in their lifetimes, exactly what Plum Village’s gift for Thay will capture.

And yet, this legacy can go farther when an extraordinary person has thought not only about the ideas and values they leave behind, but also the structures needed to continue their work.

Megan Sweas is the editor and director of communications with the USC Center for Religion and Civic Culture.

Discussions about reproductive rights continue to circulate in the religious community after the Supreme Court’s decision to overturn Roe v. Wade. CRCC’s Rev. Dr. Najuma Smith-Pollard and Richard Flory have been interviewed ...
Article

As we marked the 246th anniversary of our country’s independence from a despotic regime that fused church and state power, the staff of the USC Center for Religion and Civic Culture gathered ...