“An individual does not exist,” Jaime Martínez Luna, a Zapotec intellectual (pictured in yellow jacket), told me as we shared coffee in his kitchen in the small mountain village of San Pablo Guelatao, the birthplace of the first Indigenous President of Mexico, Benito Juárez. 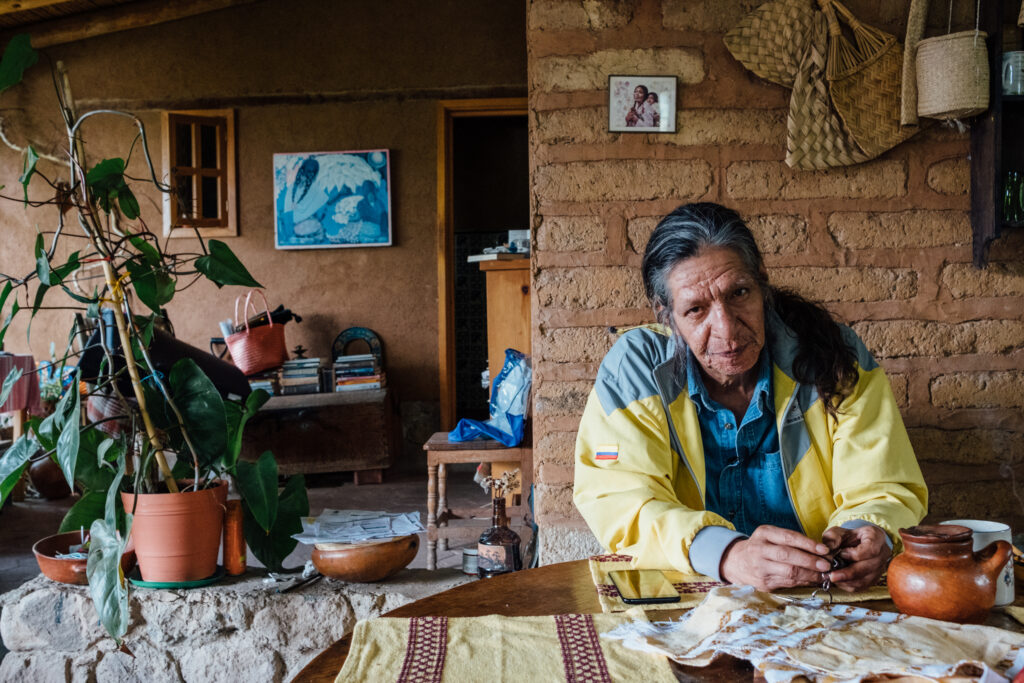 Individualism is a concept—an abstraction—invented by the West, he explained. An individual, separate and distinct from others and the environment, does not exist because we depend on everything and everyone around us. His thoughts might be very different from what I have been educated in, but they are the way of life in Indigenous communities in the Mexican state of Oaxaca.

Carmen Santiago Alonso, a Zapotec environmental defender whom I had a chance to follow and interview on various occasions, including as a part of CRCC’s Spiritual Exemplars Project, grew up in such communities. Life is not about discrete individuals but rather a collective process of growing and evolving through what Martínez Luna calls “communality,” or comunalidad in Spanish.

According to the Mexican Constitution, Indigenous communities can self-govern themselves. Communality shapes how they organize their lives together, without political parties or a central authority. Martínez Luna and his fellow intellectuals talk about four pillars of communality: connection to the land, general assemblies, collective work and celebrations. These four pillars influenced the work of Santiago Alonso, too.

From the earth we eat

On a cold morning in March 2019, we were invited to assist at a ceremony devoted to Mother Earth. Santiago Alonso and her organization, Flor y Canto, hold the ritual each World Water Day (March 22). On the day we attended, representatives from different Indigenous communities—mostly Zapotecs from the Central Valley region in Oaxaca—gathered by the lake in Santa Catarina Minas, a former mining community in an area where Indigenous peoples have spent many years fighting against extractive activities. 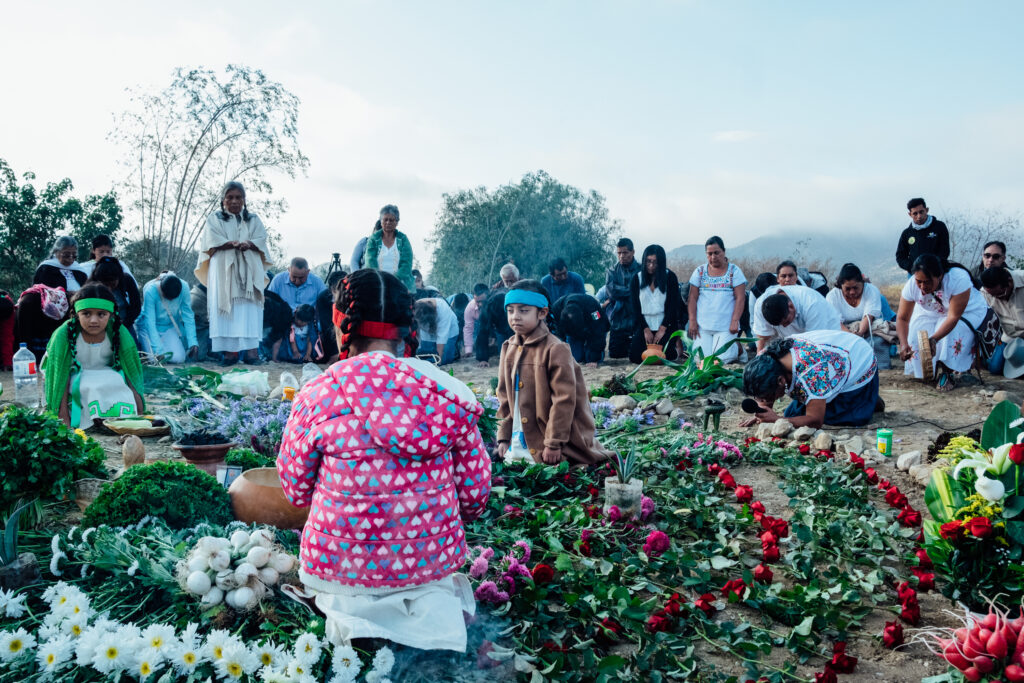 Children in the midst of a circle of crops and flowers represent the four elements of nature: earth, water, air and fire.

Before sunrise, Indigenous shamans and healers prepared a circle using crops and other gifts of Mother Earth on the site. One person held a bundle of local herbs, sweeping them over another person to cleanse him of negative energy. After all participants went through the cleansing process, they were guided to the middle of the circle to give thanks to all the elements as well as to the ancestors who taught them to take care of nature. After that, they brought flowers to the lake. They passed through a chapel by the lake to give thanks to the saint of the community.

Similar ceremonies happen at harvest times and other dates important for farmers in Oaxaca. They are one of many demonstrations of how Indigenous people here are connected to the land.

“I worked the land and I saw the importance that it has to us,” Santiago Alonso said. “We eat from the earth; the earth does not produce without water. We cannot breathe without air.”

This attitude keeps people in one of the poorest Mexican states fighting for their land rights against the designs of multinational resource extraction companies. The Mexican government sold various concessions for mining and forestry rights in the area after World War II without consulting the Indigenous people who live there. Santiago Alonso (69) spent much of her life leading and participating in these fights.

This deep identification with and ardor for the land mirrors Jaime Martínez Luna’s description of the first pillar of communality: “Territory was there first,” he said. “When we came, we became part of the place as if we were fauna. It is important to know the place where we live and to know how to use the land for the benefit of all.”

Almost 80 percent of the local land in Oaxaca is communal—no private property is allowed. In an ideal situation, the communities themselves decide what can and cannot be done on the land. 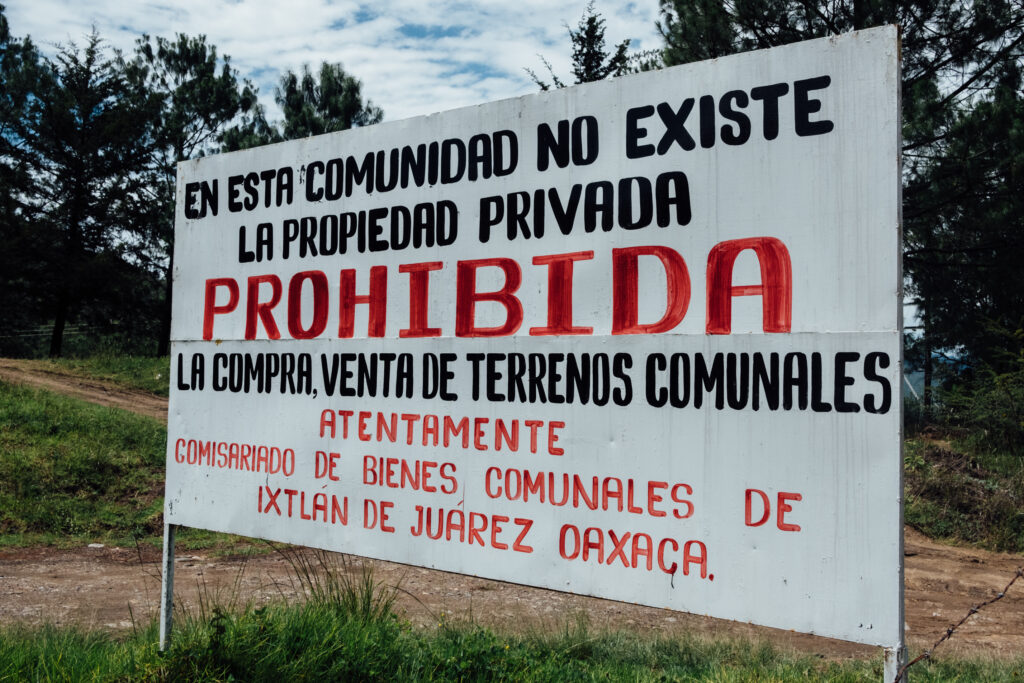 A sign in Oaxaca reads, “There is no private property in this community. Selling and buying communal land is prohibited.”

Out of 570 municipalities in Oaxaca, 417 do not allow for the presence of political parties. Instead, representatives from each family form the main decision-making body, and their participation at general assemblies is obligatory. These assemblies make decisions and choose members of the community to provide services to the community that are not provided by the state. For example, some community members are policemen, while others are in charge of finances. In most communities, no salary is provided for such positions.

The general assemblies work toward the common goals of various communities. In order to share information and coordinate activities, Carmen Santiago Alonso and Flor y Canto have formed assemblies with representatives from communities united in the fight for their water and land rights. La Coordinadora de Pueblos Unidos por el Cuidado y Defensa del Agua (COPUDA), a group of 16 Zapotec communities that recently regained control over their waters from the hands of the federal government, is an example of Santiago Alonso’s work.

Santiago Alonso, who passed away from cancer this February, said that her work was a service to the community. When we were filming in the house of her parents, she remembered her grandmothers, who both were an inspiration to her. In the interview for the Spiritual Exemplars project, she recalled that they used to sit beneath the tree in the middle of the garden and talk about their responsibilities when celebrations in their hometown were happening. Without passing communal ways of life from one generation to another, it would not be possible to sustain them.

“Tequio is the work we all give to the community,” said Martínez Luna. “It is energy, an action we contribute to the common good.” 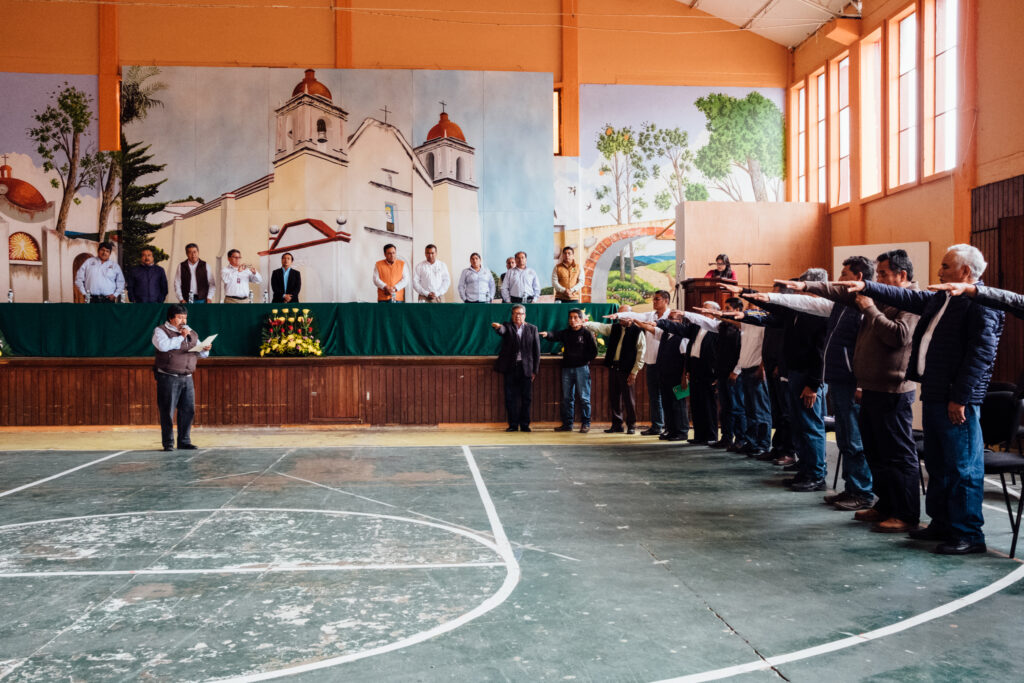 In Indigenous communities in Oaxaca, usually men take on so-called “cargos,” analogous to civil servant positions, often times without renumeration. In this photo, a group of men accept their cargos.

Indigenous people in the Oaxacan communities take actions together to clean their towns and to guard their forests so that companies from the outside do not exploit the resources. They prepare celebrations together or build new community schools or roads.

One of the activities that Flor y Canto initiated was rainwater collection in the state of Oaxaca, which has suffered droughts or erratic rains since 2005. The wells to collect water were often built thanks to the collective work of farmers, with Santiago Alonso participating in their efforts for many years before her death.

That March 2019 morning by the lake in Santa Catarina Minas was a celebration to praise Mother Earth for all her gifts. Oaxacans know how to celebrate. 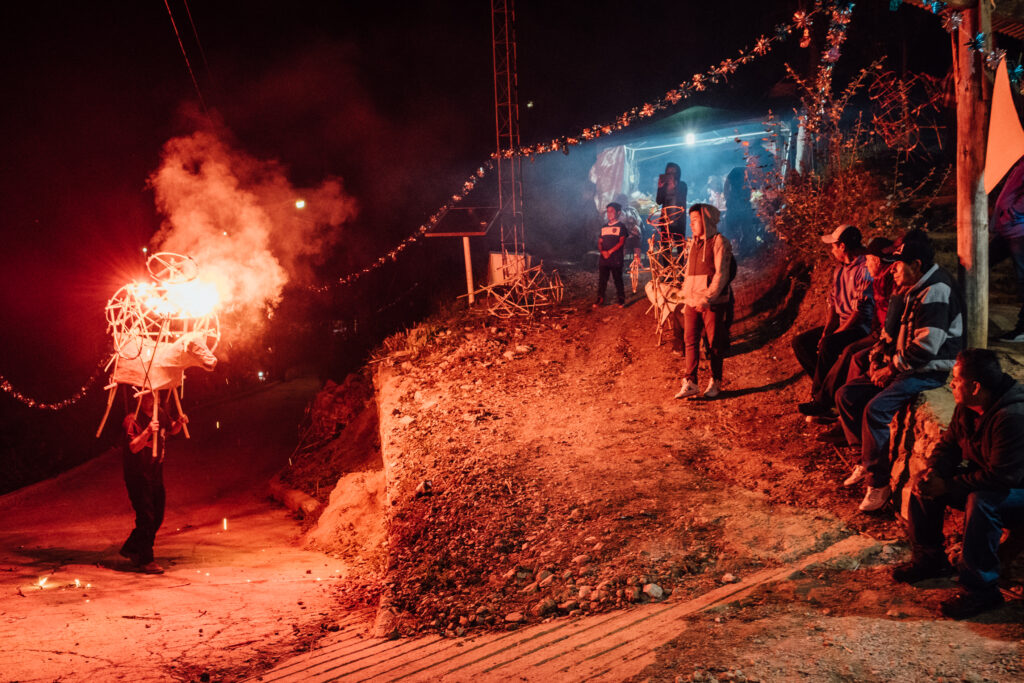 “Like everything in life, every move has a result,” said Martínez Luna. “And the result of everyday life in the community is a celebration.”

Fiestas, as they call them in Oaxaca, happen at any occasion on the seasonal and religious calendar. All community members contribute—some by providing funds, others by bringing ingredients for food. Women cook, and musicians play local music. Celebrations take days to prepare and involve expressions of gratitude and abundance.

After putting flowers in the lake, everybody at the morning ritual took their piece of bread and a cup of champurrado—a corn and cacao drink that makes cold mornings warmer. Breakfast was then followed by a shot of mezcal, with a few drops of the liquor given back to Mother Earth. After that, all the participants headed to the nearby town to attend a workshop about land protection. The people then return to work—so that there can be something to celebrate later.

I have lived in Oaxaca for more than two years now. When I first heard about communality, it almost sounded utopic. Yet, local communities also have their issues. For example, not all young people want to serve their communities for free, and many leave to search for better opportunities elsewhere, which threatens community life. While competitive individualism does not exist in the view of Indigenous intellectuals, communities do compete among themselves. In those fights, they become individual entities that envy one another.

Still, even though communality faces challenges, I believe we can learn from this way of life.

In modern culture, searching Google for answers has replaced the tradition of learning from previous generations. The search engine, however, cannot teach us values the same way that grandparents and other elders can. Among those values, I include protection of nature. The connection to the land that our ancestors once had is another. 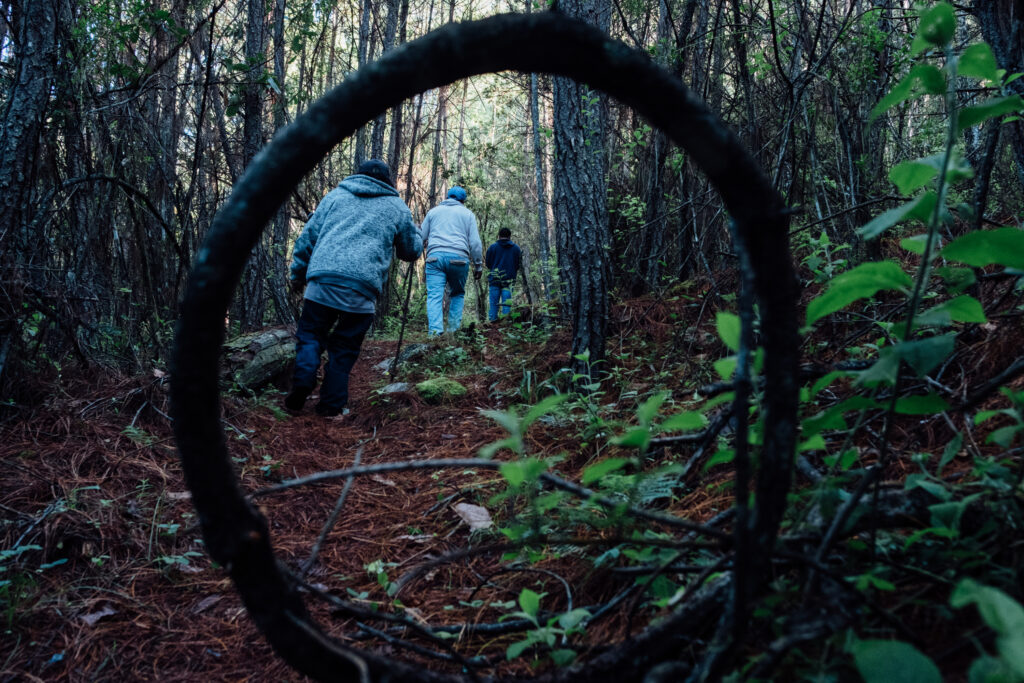 Passing knowledge from generation to generation is something that other parts of the world could re-discover. That may seem an uncontroversial proposition, but honoring place and community in order to facilitate that generational transmission of knowledge can lead to a radical reimagining of rights and freedom. In Indigenous communities in Oaxaca, obligations to others come first; only in that context can people request individual freedoms. This idea may seem unsettling at first, but it does not stand in opposition to human rights. Moreover, individualism untempered by a sense of obligation to the wider community can have disastrous consequences, as we have seen during the two years of the pandemic, when those who call for freedom often do not want to take responsibility for their own actions’ impact on others.

Adopting a perspective of communality would require taking actions in solidarity with others, for our communities. It could help us confront the challenges we face collectively, from pandemics to environmental destruction.

All photos by Noel Rojo.