I had the privilege of interviewing 2018 Nobel Peace Prize winner Doctor Denis Mukwege in 2017 in the small country of Armenia, where he was a finalist for the Aurora Prize—a $1 million award that is given annually to an individual who has exhibited extreme courage in their humanitarian work.

The previous day, we had visited the memorial site in Yerevan, which honors the 1.5 million Armenians who died during the genocide in 1915 in Turkey. When we sat down for tea the next morning, Mukwege said that he had cried during the tour of the memorial museum. In his own country, the Democratic Republic of the Congo, some 10 million people have died in recent wars and civil conflicts. The doctor kept asking, “Why?” Why does the world remain silent in the face of mass genocide? How can the Christian church ignore such barbarity, especially, he said, when every human is made in the image of God?

“Can you believe in God when you see how people are killing each other?”

Mukwege’s father was a Pentecostal pastor in the Congo. At age 12, he was baptized, which was a self-conscious decision to identify as a Christian. He participated in Bible Studies during his teenage years and later in college and said that the moral ideal that deeply impressed him was the commandment to love God and love your neighbor as yourself. This idea became very personal for him at mealtimes. How could he be eating without sharing his food with those who were hungry?

His calling to be a doctor occurred at age six or seven. He was visiting a household with his pastor father where there was a sick child. The father prayed for the child and then said, “Goodbye.” Denis said that he was shocked by his father’s action. He asked his father, “Dad, why are you praying, but don’t give him medicine? He’ll die.” His father replied, “Denis, I’m not a doctor.” It was at this point that the idea of being a physician was born. However, his family was extremely poor. How could he afford the proper schooling?

Initially, he thought that maybe he could be a nurse. That was a lofty but reasonable goal. A friend then suggested that perhaps he could be a medical doctor. So, when he entered a university in Kinshasa, he rejected the idea of studying construction and engineering and opted for medicine. But after two years of college, his mother became ill and requested that he move closer to where she was living in Bakavu in the Congo and study at the University of Burundi. He obeyed her wishes and graduated from the school with a medical degree in 1983.

Working as a pediatrician in a rural hospital near Bukavu, Mukwege began to encounter a variety of serious gynecological issues in women, including genital lesions, fistulas and other complications from childbirth, so he decided to go to the University of Angers in France, where he completed a medical residency in gynecology and obstetrics in 1989. He said that it was fine to be a pediatrician, but if the mother does not survive childbirth, her children will not have a good life. More recently, in 2015 he earned a PhD from the Université libre de Bruxelles for a thesis on traumatic fistulas in the Eastern Region of the DRC.

Sustaining Mukwege throughout his educational career and medical practice at Panzi Hospital near Bakavu, which he founded in 1999, is a deep faith that God will take care of your needs if you seek to fulfill God’s direction for your life.

When he was 25 years of age, his mother insisted that he should get married. “This is a very bad idea,” Mukwege replied, knowing that neither he nor his parents had the means to support a young family. But his father said, “God will provide.” Trying to balance school and marriage, he started a small business selling books, pens, papers and other small things to students. But then, what he described as a small miracle occurred. Someone volunteered to give him a scholarship. In his view, he had followed the biblical commandment to “honor your father and mother” and as a result God had blessed him.

When he was 40 years of age, Mukwege experienced something that still haunts him. He was running a missionary hospital and one of the missionaries became ill and had to be evacuated. War had started in Congo, but he reassured his staff and patients that the hospital would be a safe zone. While he was gone for a few days to help evacuate the missionaries, the hospital was attacked. All patients and staff were killed, including two women that he had just operated on. “It was a really terrible thing,” he said. “Maybe I gave bad advice to my staff.” He said that it took him a long time to recover from this event, and with his family, he decided to go to Nairobi, Kenya as a refugee, where he worked with Norwegian Church Aid to assist other refugees from the Congo.

In 1999, he returned to Bukavu, where he established a small maternity clinic. This was in the period after the genocide in Rwanda when a million or more Hutus had fled to the DRC and other neighboring countries. Multiple armies had turned the Congo into a killing field. Mukwege recalled his first patient. She had not come to give birth. “She came because she was raped. They had shot in her genitals. She was bleeding and in a very bad condition,” he said.

This began a new chapter in his life work, dealing with thousands of women who had been sexually violated. The Panzi Hospital that he established has treated more than 85,000 patients with gynecological issues, with about 60 percent of the injuries caused by sexual violence.

“Sometimes I have this question,” Mukwege said, “Can you believe in God when you see how people are killing each other? How they are raping, even babies and children? But always, my response is, this is not the responsibility of God. God gives us the freedom to choose.” Mukwege does not see God as responsible for the evils of war and sexual violence. These acts are the result of human choice and have the capacity to harm the perpetrator as well as the victim.

The role of the Christian, Mukwege said, is to be “salt” within these crisis situations, demonstrating an alternative set of values. We are not here for our own pleasure and happiness, he said. “No, you have a mission. You are here for others. You are here to give testimony of God who is in you.” In his view, God is not some metaphysical abstraction in the sky; God’s image is reflected in humans whenever they make right choices for good.

In his own case, he believes that God had a purpose for him from his earliest years. His mother told him that shortly after he was born, he got a severe infection from the stump of the umbilical cord. His mom said, “You became yellow, were breathing very badly, and had a high fever.” He has witnessed many children die from infections today, let alone 60 years ago before antibiotics were accessible in Africa. Because he survived, Mukwege believes his life has a purpose. Although his life has not been without many challenges, he also pointed to other circumstances when he said that God directly intervened in his life as confirming his view that God exists. “You can encounter many problems, but, if you follow His plan, you also find many solutions that you don’t expect,” he said. 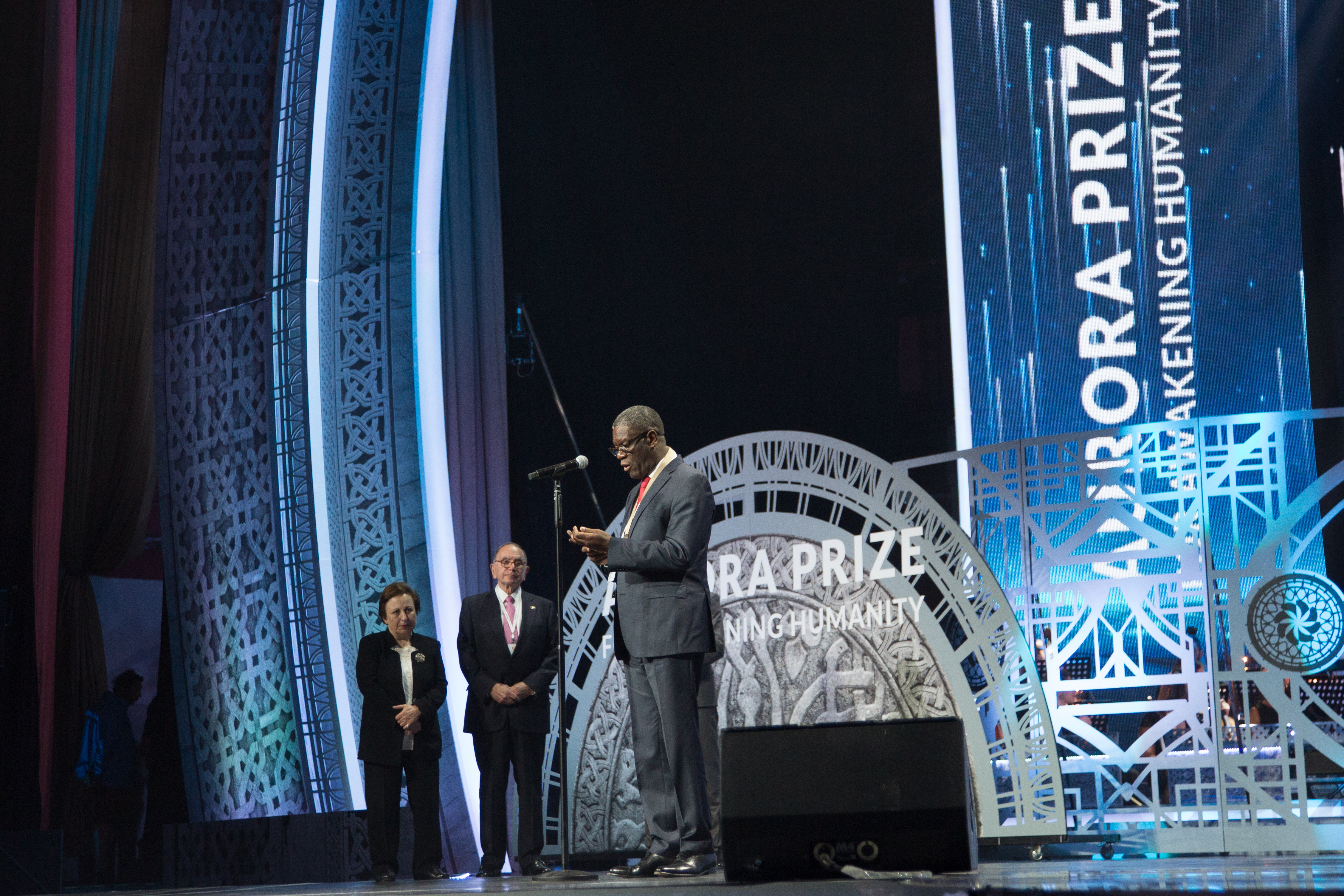 This year’s Nobel Peace Prize is an acknowledgement of the great pain caused by sexual violence around the globe. In concluding our interview, Mukwege said it’s the failure of society, including the church, to acknowledge the violence that has occurred in the Congo and elsewhere. To be aware of evil and remain silent makes one responsible, Mukwege said.

This article was produced as part of “Spiritual Exemplars: A Global Project on Engaged Spirituality” at the USC Center for Religion and Civic Culture, with support from the John Templeton Foundation and Templeton Religion Trust. Opinions expressed do not necessarily reflect the views of the supporting organizations.

This video was originally published by Religion Unplugged, with the support of CRCC’s global project on engaged spirituality. As health care professionals assess the lessons of the COVID-19 global pandemic, one unexpected message ...
Kim Lawton
Article

Neris Gonzalez: ‘My Dreams Will Never Be the Same’

This story was originally published by Harvard Divinity Bulletin, with the support of CRCC’s global project on engaged spirituality. NERIS GONZALEZ WAS WATCHING the news when the grainy video of George Floyd appeared. She sat ...
Julia Lieblich
Article

This video was originally published by Religion Unplugged, with the support of CRCC’s global project on engaged spirituality. As health care professionals assess the lessons of the COVID-19 global pandemic, one unexpected message ...
Kim Lawton
CRCC in the News

Since 2016, CRCC has shared the trends in religion and society that we see shaping the coming year. What started as light-hearted predictions has grown more ominous over the years. Anybody surprised ...
Read this next

This story was originally published by Religion Unplugged, with the support of CRCC’s global project on engaged spirituality. PANKISI, Georgia— Off the beaten path and between the thickly forested Caucacus mountains bordering Russia ...
Clément Girardot and Julien Pebrel