I had the chance to meet with two exceptional women for the USC Center for Religion and Civic Culture’s global project on engaged spirituality: Makvala Margoshvili and Marie Stella Kouak. They were born on different continents, at different times and have different socio-cultural backgrounds, but both have relied on similar sources of support for their work. Yet, they have not found the same success and impact, partly due to the different level of access each has to the social, cultural and economic resources that are found in their respective communities. 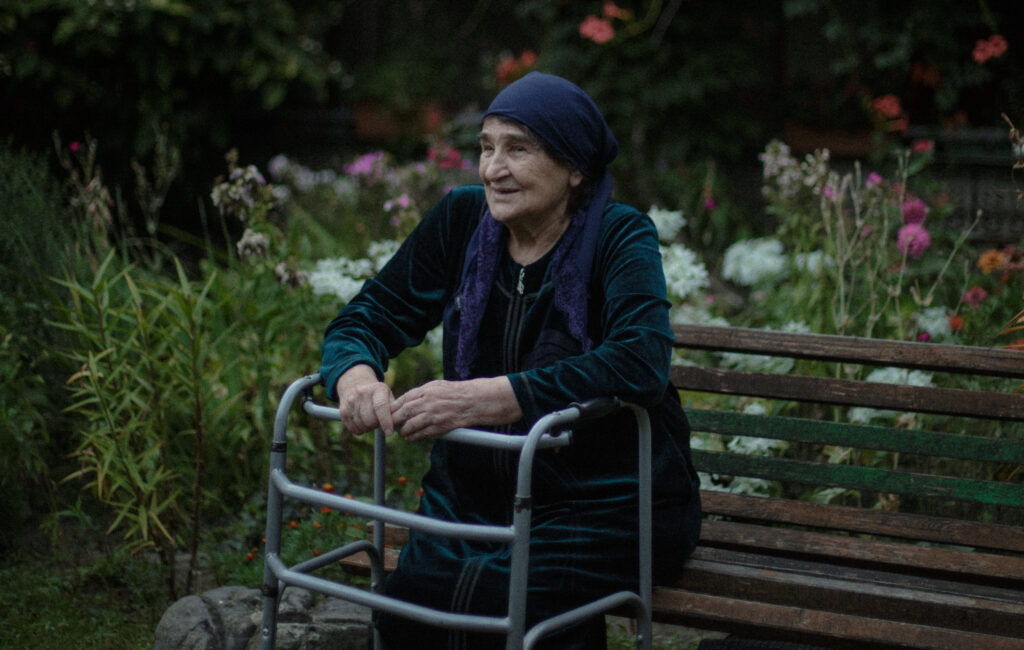 Makvala Margoshvili was born in 1937 in the USSR. She has lived all her life in Duisi, a village in Eastern Georgia populated by Kists, an ethnic minority closely related to the Chechens. Georgia has been an independent country since 1991, and it is mostly populated by Orthodox Christians, while Kists are Muslims. During the Soviet period, Makvala served her community as a nurse. When the Chechen-Russian war erupted in 1994, she was profoundly shocked and started humanitarian actions to help incoming refugees. In 1995, she created a musical ensemble for women with the aim of making Kist and Sufi Islamic cultures better known in Georgia and abroad. In 1999, she founded the NGO Marshua Kavkaz (meaning “Peace in the Caucasus” in the Chechen language), which promoted the development of rural tourism in Duisi and the surrounding villages. Due to her declining health, Makvala can’t leave her home anymore, and she can be considered as a “retired exemplar.”

Marie Stella Kouak was born in 1967, 30 years after Makvala. She is a Catholic sister who was raised and lives in Dapaong, Northern Togo, a region that is religiously mixed, including Animist, Muslim and Christian communities. There is often an overlap between traditional and monotheistic beliefs. In 1999, Marie founded an NGO called “Living in hope” to assist those who suffered from AIDS. With a handful of volunteers, she opened two orphanages to welcome the children whose parents died from the pandemic.

There are some similarities between Makvala’s and Marie Stella’s biographies. The most obvious similarity is that they are women living in communities where women usually don’t assume active roles in shaping public life. They are also both devout in their faith and consider spiritual values as a driver of their social activities. Furthermore, both NGO founders live in poor areas that have been neglected by the central authorities of their respective countries.

One of the main differences between the two women is the scale and impact of their actions and the sustainability of their organizations. While Vivre dans l’Espérance in Dapaong has grown over the past 20 years into one of Northern Togo’s biggest non-profits, Marshua Kavkaz, in Georgia, struggled to get funding to expand and finally ceased its activities in 2010.

This led me to think that, besides their particular personalities and talents, external factors also play a crucial role in the success of spiritual exemplars—factors related to the social, cultural and economic environment in which exemplars operate. While the project will unearth other influences on exemplars’ ability to do their work, I particularly noticed three external factors, based on working on these two profiles:

1. Civil society legacy and project management knowledge
In Georgia during the Soviet era, there were no associations or organizations operating outside of state institutions, and citizens were discouraged from undertaking non-state-sanctioned initiatives. So, when Makvala wanted to create an organization in the 1990s, she had to start from scratch. She managed to found an NGO, but neither she nor anyone in her community had the knowledge they needed to apply for funds and manage projects. Many exemplary people undertaking projects for social betterment come from countries that are hardly democratic, but the complete erasure of civil society under certain regimes makes it harder for some to flourish.

2. An organized and internationally networked religious community
Marie Stella Kouak was born in a remote region of Togo. To pursue her calling to help the poor and the sick, she joined a Catholic congregation whose motherhouse was based in Northern France. Her congregation then proposed that she undertake nursing studies in Belgium. When she started her activities in Togo, she could rely on press coverage in a French Catholic newspaper, which attracted the support of individuals and human development groups close to the Catholic Church. Compared to Islam and other branches of Christianity, the Catholic Church has the most global, centralized and well-organized institutional structure of any other faith group. Do Catholic spiritual exemplars benefit from this institutional frame? Are their actions covered by the press more often because of the global prominence of the Catholic Church? Are they rewarded more often? It is striking to note that in the initial list of 207 spiritual exemplars compiled by the USC Center for Religion and Civic Culture, 67 persons were categorized as Catholic. Catholics make up 32 percent of the sample, while they are only around 18 percent of the world population.

3. Volunteering and social innovation culture in the community
Both Makvala Margoshvili and Marie Stella Kouak faced resistance from their communities, but Marie Stella could rely on the support of a faithful group of local volunteers who helped her without expecting anything in return. They complemented what she was doing with other skills and supported her through hard times. Later on, some of them even became full-time employees of the NGO.

Makvala never managed to garner substantial support from her community and even felt that she was not understood in her own family. She lacked the skills and resources that other people could have provided to make her initiatives more successful and impactful. This lack of support is not specific to her case; volunteer culture is underdeveloped in Georgia. Besides the Orthodox Church, there is a lack of grassroots organizations in many fields of social, political or cultural action.

Without support from the local community and religious institutions, humanitarian initiatives are doomed to vanish or will take longer to flourish. It is hard to extrapolate conclusions from two profiles, but do spiritual exemplars fare better in communities where the culture of civic engagement is strong? This question sparks my interest and will require a lot more research.

What I want to keep in mind for the upcoming reporting work is that it is crucial to look beyond the individual biography of each exemplar to get a good understanding of the broader picture. Not all societies and religious communities support humanitarian action in the same way. This can also help us to understand that spiritual accomplishment is not just related to numbers and awards, it’s also related to the ability of the exemplar to break many social and cultural boundaries and access needed resources.

Clément Girardot is a journalist fellow with the Spiritual Exemplars Project.

This article was originally published on Smashboard, with the support of CRCC’s global project on engaged spirituality.  “All women should have the ‘morning-after’ pill in their purses”. It’s a compelling statement, especially since ...
Linda Freund