This article was originally published in Christianity Today, with the support of CRCC’s global project on engaged spirituality.

It was raining ferociously, causing the women and orphans to move away from the open windows to avoid getting wet. The meeting had opened with singing as survivors of the 1994 genocide in Rwanda danced away their sorrows. A teenaged orphan beat time on a drum to the music. Women wore long flowery dresses and beautiful head scarfs. Babies sat on laps; toddlers wandered freely. After the singing, the Solace Ministries director of counseling, “Mama Lambert,” welcomed newcomers—many of whom walked miles to the ministry’s Kigali headquarters. They had come because someone told them it was a place of comfort. 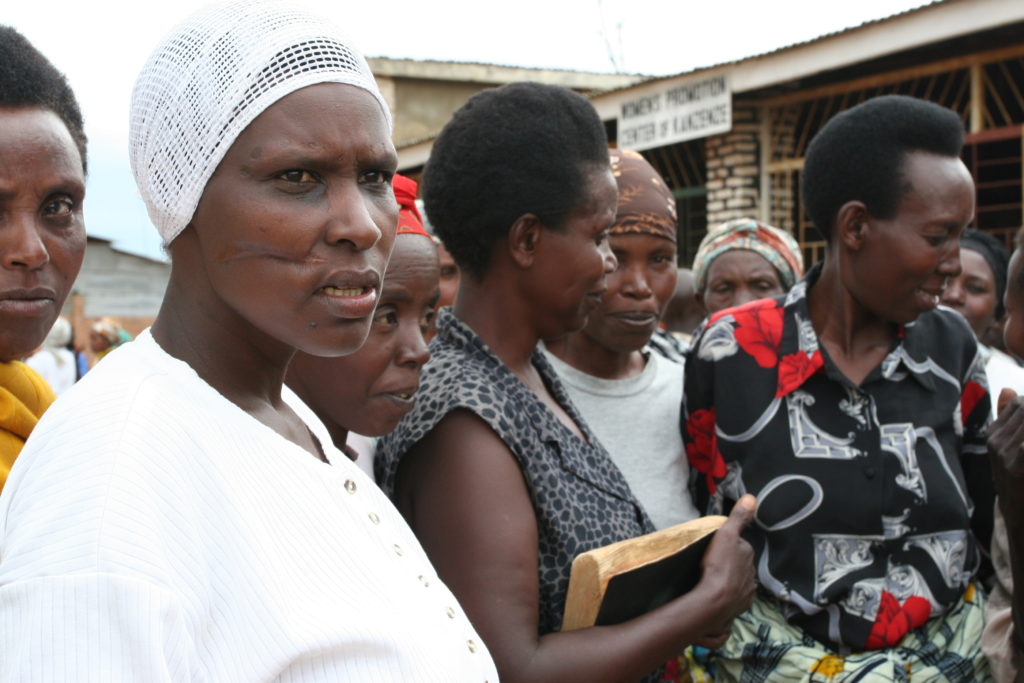 From April through July 1994, an estimated 800,000 Tutsis were killed in the Rwandan Genocide, and many more were left with physical and emotional scars. Solace Ministries started in 1995, growing from intimate gatherings of widows into 56 communities of survivors around the country, serving over 6,000 families last year. Since it began, Solace Ministries has assisted approximately 20,000 people through counseling and spiritual care, education, employment and health. Their medical clinic under the same name serves a client population of more than 50,000 patients a year.

Mama Lambert, whose Rwandan name is Mukarubuga Beata, lost four of her children in the genocide, along with her husband and their home, which was destroyed. The founder of Solace Ministries, Jean Gakwandi, lost his entire extended family, but his immediate family miraculously survived while sheltered in the home of his German teacher.

As my wife, Lorna, and I listened in on the meeting for the next four hours, various survivors rose spontaneously and testified—often tearfully—about their experience during the 100 days of the genocide. The accounts varied but included frequent references to rape, or fleeing to a church for safety, only to have the building attacked by the Hutu militia. A widow described how her baby was bludgeoned to death; she survived because the blood and body parts of victims lying next to her in the church deceived the killers into thinking she was already dead.

Jean Gakwandi sat next to us, translating from the local language of Kinyarwanda to English. When one young orphan boy stood and told of his mother being beheaded and did not shed a tear, Jean whispered that with healing from his PTSD, the tears would flow. After another survivor offered a rambling, incoherent list of various traumatic events, Jean said that, in time, she would hopefully develop a narrative of her life—one that would contextualize the genocide within a larger framework of meaning and purpose.

Searching for faith in the dark

Having spent 15 years interviewing survivors during multiple trips to Rwanda, I have tried to untangle some of the elements that enable survivors to regain their humanity after the genocide.

In researching two major genocides—the Armenian genocide in Turkey in 1915 and more recently the genocide of the Tutsi in Rwanda—I have become convinced that at the heart of survivor trauma is a sense of moral disequilibrium or rupture that violates all norms of civility. The horrors that genocide survivors experience and witness make no sense. There is no way to rationalize them. It is only in the warm embrace of a community, where one feels loved and accepted, that one can begin to create a post-trauma identity.

The problem of theodicy—where was God when all of this happened?—is an issue that troubled many survivors. The deaths of loved ones made no sense. What did connect with survivors after the genocide was when a person reached out in compassion, crying with them, appealing to a God of love who had a purpose for their life. In this regard, Jean Gakwandi and Mama Lambert became agents of the divine.

Jean told me that as a child, he struggled with fear and feelings of worthlessness after his family was attacked in 1959 when the Tutsi king was killed, and again in 1963 following the formation of the Hutu government. He had a remarkable religious experience at age 18, when he turned from being a self-proclaimed atheist to inviting God to take control of his life. He completely gave up drinking, which was his way of dealing with insomnia and self-doubt. He found in the Christian Scriptures a guide to living purposefully.

In early April 1994, Jean’s family hid in a closet as attackers searched the house, shooting randomly through the widows and in their bedrooms. During the genocide, various promises from the Bible gave him hope as his family hid together with a few other Tutsis.

When the genocide ended, Jean said that he felt emotionally numb. But he also felt that he had survived for a reason, and a verse from the book of Isaiah echoed in his ears: “Comfort, comfort my people, says your God” (40:1).

In response, Jean invited a group of widows to gather together to share their stories. Mama Lambert was in this first group of a dozen widows. She was depressed to the point of being suicidal.

Raised in a Catholic home, Mama Lambert was married, had five children, and worked as a teacher. During the nearly three months of killing, she had carried her infant son, Lambert, on her back.

When she approached Hutu friends, they rejected her, under strict government orders not to harbor Tutsis. One time, a former Hutu student saved her from a lineup of Tutsis about to be slaughtered. On another occasion, in disgust at the absence of God’s intervention, she threw a small Bible she was carrying into the bushes, only to discover some ripe berries where the Bible landed. These berries revived little Lambert, whose name she took after the genocide—the mother of Lambert or, Mama Lambert.

After the genocide, Mama Lambert found solace and comfort in her faith, saying that prayer, both communal and personal, is what gives her sustenance. Neither Jean nor Mama Lambert rationalize the genocide as God’s will. Instead, they believe that they survived for a purpose. I am convinced that part of their own personal healing, day by day, is that they see themselves as agents of God’s comfort to others.

Initially, people present themselves as a bundle of problems—that is their identity, Jean said. And, indeed, they are oftentimes hungry, sick and struggling with various symptoms of PTSD, such as insomnia, flashback memories, or avoiding their trauma.

Jean said that these problems must be addressed, but equally important is for survivors to gain a sense of personal identity and agency. While individual counseling is important, a new self must be grown in community, in interaction with others.

At the heart of Jean and Mama Lambert’s approach to healing is compassion—crying with fellow survivors, listening to them as they reveal experiences that previously were too painful to share and creating a communal structure in which survivors can meet on a regular basis, being supported not just emotionally, but with their physical needs as well. Unlike the many nongovernmental organizations funded and run by first-world countries, Solace Ministries is an indigenous organization, led by individuals who have evolved a program in response to their own need for healing.

Two steps forward, one step back

One day, we journeyed with Mama Lambert to where her house once stood. We saw the lake where her husband’s body was thrown after he was killed. We stood next to the memorial she had built after she recovered the bodies of her two daughters that had been thrown into a pit latrine. We visited a nearby location where several dozen of her Tutsi friends had been killed, including her son.

I asked Jean and Mama Lambert whether they have forgiven the perpetrators of the genocide. They both reject any quick-fix interpretations of forgiveness and believe that forgiveness is a process that often involves a step or two forward and similar steps backward. When forgiveness is not preceded by healing from trauma, it often is accompanied by emotional blunting, where the individual seals over the pain, which then paralyzes them from being able to feel other deep emotions like love and joy.

Forgiveness is not a rational process; when it comes, it is near the end of a long struggle with grief, anger, and loss. Both Jean and Mama Lambert said that it is helpful for survivors to return, as they are emotionally able, to the site where their loved ones were murdered. If they know where the killers buried the bodies, it is important to recover their bones, ritually wash them, and then rebury them with dignity.

Both Jean and Mama Lambert see the value of forgiveness—not for the perpetrator, but for the victim, who potentially experiences a new sense of freedom from the revolving nightmares, flashbacks, and preoccupation with what happened. In their experience at Solace, forgiveness is most difficult for survivors who were raped and continue to struggle physically with the consequences of the genocide. 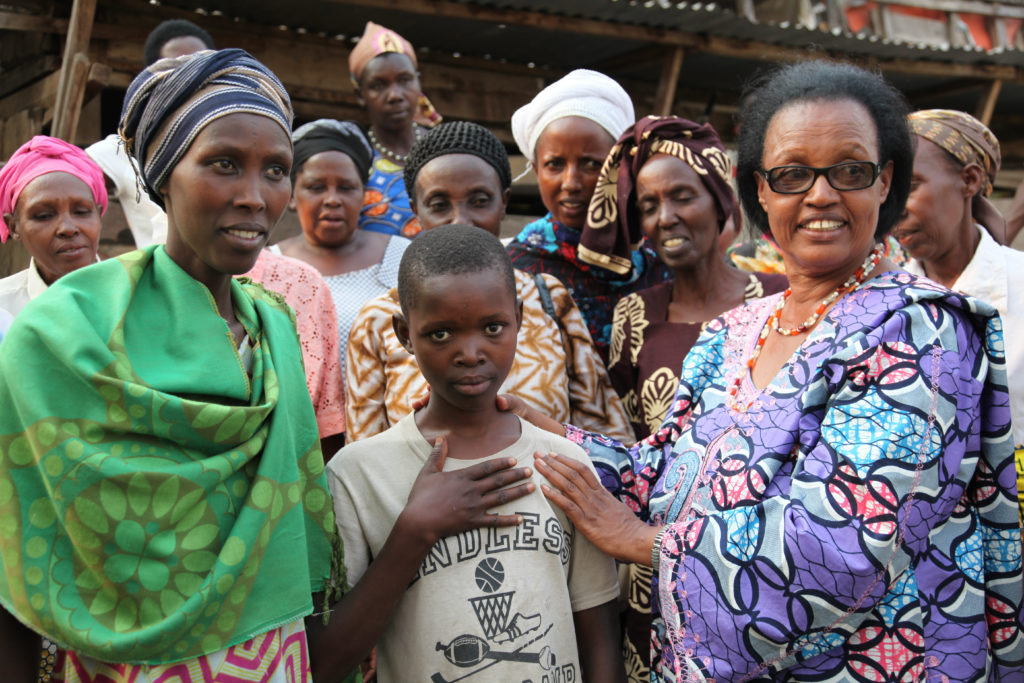 For survivors who experience heartfelt forgiveness of the perpetrator, it often is perceived as a gift, an act of transcendent grace at the end of a long struggle. And, importantly, forgiveness does not mean forgetting.

How do survivors of war, earthquakes, and genocide—situations where social trauma is so extensive that individual counseling is not possible—regain their humanity? The answer suggested by Solace Ministries is that healing best occurs in a community of fellow survivors who can accept one’s pain—collectively bearing each other’s burdens.

Such a concept is only possible within a compassionate community where God’s love is embodied in the caring acts of people who understand themselves to be agents of a divine purpose. Moral rupture is seldom healed rationally. Moral equilibrium is more easily achieved in the nurturing presence of fellow survivors who understand the pain of genocide and can help carry the burden of their neighbor’s memories.

In the rugged landscape of the Kotayk Province of Armenia, Geghard Monastery rises from an amphitheater of steep cliffs like a revelation. Even the long trek to the monastery complex, surrounded by ...
Priyadarshini Sen
Commentary

In the rugged landscape of the Kotayk Province of Armenia, Geghard Monastery rises from an amphitheater of steep cliffs like a revelation. Even the long trek to the monastery complex, surrounded by ...
Priyadarshini Sen
Read this next

This article was originally published by Religion News Service, with the support of CRCC’s global project on engaged spirituality.  YEREVAN, Armenia (RNS) — Home for Lara Aharonian is this capital city whose architecture ...
Priyadarshini Sen