Jerry Falwell Jr. will leave behind a very different legacy from his influential father

Jerry Falwell Jr. will leave behind a very different legacy from his influential father

This article was originally published by The Conversation.

Jerry Falwell Jr., son and namesake of the founder of the evangelical Moral Majority movement, has resigned as president of Liberty University.

The resignation followed the Liberty board’s decision to put him on an “indefinite leave of absence” after he posted a picture on social media with his arm around a woman who wasn’t his wife, his underwear partially revealed.

Falwell Jr. also announced that his wife Becki had an affair with a former pool attendant, Giancarlo Granda, who was close to the family. Falwell Jr. said that the affair was short-lived and that the married couple had reconciled quickly.

In an interview with Reuters, Granda said the affair he engaged in with Becki Falwell had been going on for seven years and that Falwell Jr. was involved as a voyeur to the sexual activity. Falwell Jr. has denied the allegation.

The public scrutiny given to the alleged scandal reflects the prominent role that Falwell Jr. holds in conservative circles. He was among the first few evangelical leaders who endorsed Donald Trump in 2016. Later, he was asked to head an education reform task force under President Trump.

As a scholar who has been studying Protestant fundamentalists and evangelicals for more than 20 years, I note that Falwell Jr.’s perceived leadership role within evangelicalism – and his appeal to Donald Trump – is best understood as a product of his family legacy.

His late father, Jerry Falwell Sr., who died in 2007, was an enormously influential figure in American politics.

From televangelist to political activist

Falwell Sr. was pastor of Thomas Road Baptist Church, a fundamentalist Christian megachurch in Lynchburg, Virginia. Along with several other evangelical televangelists in the 1970s, he enjoyed a large national following who tuned in to his weekly televised church service. 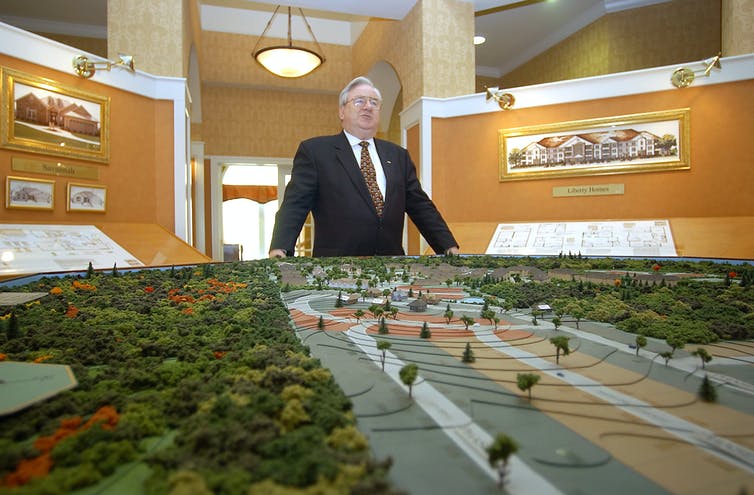 Rev. Jerry Falwell in front of a scale model of Liberty Village on May 30, 2002 in Lynchburg, Virginia. AP Photo/R. David Duncan III

Coinciding with the popularity of Ronald Reagan, Falwell Sr. founded the Moral Majority in 1979 as a conservative Christian political lobbying group. Although the founding of the Moral Majority is popularly seen as an anti-abortion and pro-family movement, its real roots were different.

Falwell Sr. and other evangelical leaders felt the federal government was overreaching with its decision that “racially discriminatory” private schools, such as were being operated by evangelical groups, were not entitled to nonprofit tax-exempt status.

The Moral Majority ultimately expanded its platform from segregation in schools to include what is now a familiar agenda: supporting and sponsoring legislation for “traditional” family values and prayer in schools. It also opposed LGBTQ rights, the Equal Rights Amendment, abortion and other similar social-moral issues.

Through his nationally televised church services, Falwell Sr. reached beyond his original followers to other groups that were in agreement with the conservative, pro-family, racial agenda of the Moral Majority.

Rise of the religious right

Scholars such as sociologist Martin Riesebrodt have argued that movements such as the Moral Majority were “patriarchal protest movements,” intended to reestablish the leadership and authority of males in their families, in government and in religious institutions.

The emergence and popularity of the Moral Majority came at a time when there were growing efforts to establish the rights of women, people of color and the LGBTQ community. The Moral Majority thus represented the conservative religious reaction to those efforts.

Throughout its 10 years of existence, the Moral Majority became a decisive and powerful force within conservative politics and the Republican Party. Falwell Sr. and the Moral Majority worked with other equally conservative evangelical and fundamentalist Christian leaders, such as James Dobson, Tim LaHaye, Pat Robertson and Phyllis Schlafly.

Ultimately, this broad coalition of conservatives – mostly white Christians – came to represent the “religious right.” It has had an enormous impact on both the Republican Party and on public policy more generally since its founding. 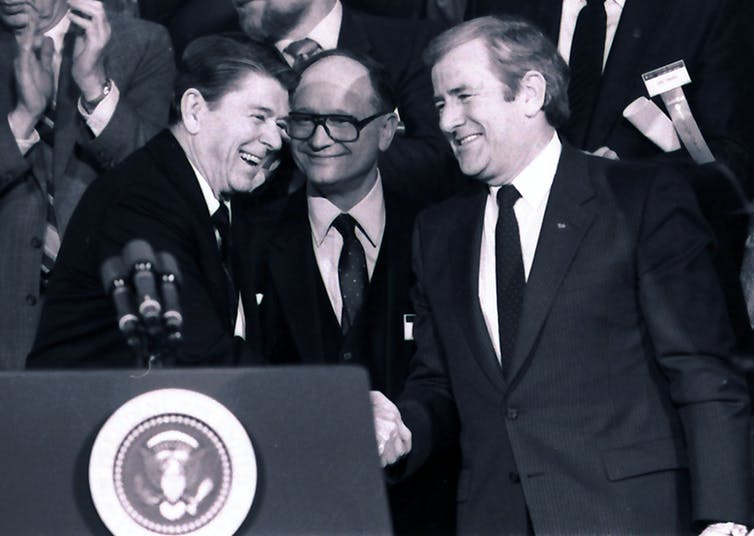 For example, Republican candidates for office, dating back to Reagan and George H.W. Bush, recognized the power of the religious right as a voting bloc, and routinely visited evangelical and fundamentalist institutions such as Falwell’s Liberty University and Bob Jones University in South Carolina.

Further, it was the efforts of the Moral Majority and other important organizations within the broader religious right – such as Schlafly’s Eagle Forum and Dobson’s Focus on the Family – that led to the defeat of legislation such as the Equal Rights Amendment and efforts to block legislation furthering LGBTQ rights. Similar issues echo today as well, presented in the guise of religious freedom for evangelical Christians.

Political involvement was a shift for Falwell Sr., who as a fundamentalist Christian avoided political organizing as a matter of religious conviction. Fundamentalists, as distinct from evangelicals, tended toward separation not only from other Christians who didn’t share their particular brand of Christianity and its emphasis on theological, personal and social purity, but also from entanglements with the political world.

Thus, Falwell Sr.’s move into politics also entailed a shift in his theological perspective. He moved from a separatist stance that taught that God controls everything, including politics, to one that required human action to fulfill God’s intended destiny for America.

For Falwell Sr., and the mostly white, conservative fundamentalist and evangelical Christian world that his movement represented, these political battles were moral and spiritual battles intended to save America from the moral quagmire that they believed it was becoming.

Falwell Sr. died in 2007, and his efforts to combine his religious and political commitments fell to his son, Jerry Falwell Jr., who as president of the Christian college Liberty University has been outspoken in his support of Donald Trump.

This resulted in criticism from some students, faculty and alumni of Liberty University. Concerns were also aired over Falwell Jr.‘s behavior and financial dealings, although he generally remained a popular leader within the Liberty community.

Much like his father, Falwell Jr. was outspoken in his opinions on issues important to the religious right. He supported Second Amendment rights, to the point of advocating that students at Liberty University carry guns.

And he didn’t shy away from picking fights with other evangelical leaders. He verbally attacked Russell Moore, the president of the Ethics and Religious Liberty Commission of the Southern Baptist Convention, who had criticized the Trump administration’s treatment of migrant children and families at the border. 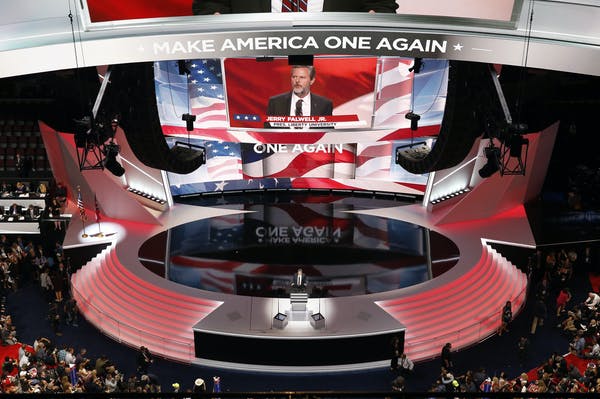 In the end, Falwell Jr.’s downfall came via a fate that has befallen other charismatic religious leaders – alleged sexual improprieties and long-rumored financial irregularities at Liberty that tracked back to him and his relationships. Falwell Jr. has rejected all allegations in the past.

Falwell Jr.’s legacy is likely to be be quite different than his father’s. He is more well known in Liberty University circles for his business acumen, developing it into the largest evangelical university – owing largely to its enormous online program enrollment – and becoming one of the only evangelical universities with an endowment of any size.

It is possible that he might find another welcoming place within evangelicalism. If not, he wouldn’t be the first “preacher’s kid” to leave the faith completely.

This article incorporates material from a piece first published on July 10, 2017. Read the original article.

When CRCC’s “Spiritual Exemplars Project” team was invited to present about “resilience,” it was easy to think of many examples within our sample of 100+ spiritually engaged humanitarians who had endured and ...
Hebah Farrag
Commentary