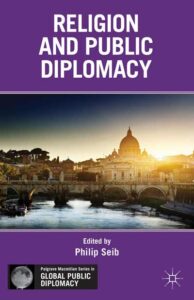 Religion and Public Diplomacy discusses the volatile consequences that can be a result of mixing religion, new communications technologies and a variety of foreign policy issues. By addressing key issues of faith in an increasingly technologically connected world, the book argues that religion is integral to the planning and implementing public diplomacy.

CRCC Managing Director Brie Loskota and Director of Research Richard Flory co-authored the opening chapter, in which they discuss the many reasons why religion is still a vital, necessary part of today’s modern, turbulent world.

An excerpt from the chapter:
“While many believe that there has been a resurgence of religion in the world, a closer look shows that religion, as beliefs, associations and a motivator for public action, has never gone away.

…Religious institutions, leaders and adherents represent an important segment of the global publics that public diplomacy seeks to influence and partner with.

The renewed attention given to the power of religion by diplomats and public officials may not be the result of religion having drastically changed, but instead the result of a heightened awareness of what has always existed.

Brie Loskota is a contributing fellow and the former executive director (2016-2021) of the USC Center for Religion and Civil Culture.

Neris Gonzalez: ‘My Dreams Will Never Be the Same’

This story was originally published by Harvard Divinity Bulletin, with the support of CRCC’s global project on engaged spirituality. NERIS GONZALEZ WAS WATCHING the news when the grainy video of George Floyd appeared. She sat ...
Julia Lieblich
Video

Witness as Ministry: Serving God and Refugees in Beirut

Beirut, Lebanon has been wrecked by war and strife for many decades. More recently, there has been a flood of refugees from Syria and, in 2020, much of the city was leveled ...
Donald E. Miller
Article

Azza Karam: The Role Of Women In Faith And Diplomacy

This article was originally published in Religion Unplugged, with the support of CRCC’s global project on engaged spirituality.  LINDAU— Azza Karam was just about to step up to the podium at the Inselhalle in ...
Ken Chitwood
Article

This article was originally published by Religion News Service and GroundTruth, with the support of CRCC’s global project on engaged spirituality.  On the morning of July 31, Samuel Chu, a Hong Kong ...
Kevin Douglas Grant
Commentary

This radio documentary was produced by KALW’s The Spiritual Edge, with the support of CRCC’s global project on engaged spirituality.  To hear this and other profiles, subscribe to The Spiritual Edge podcast in ...
Shaina Shealy