The Oxford Handbook of Religion and the American News Media

The Oxford Handbook of Religion and the American News Media 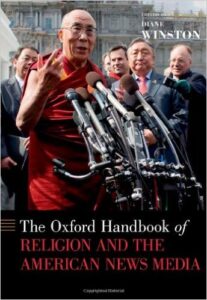 Whether the issue is the rise of religiously inspired terrorism, the importance of faith based NGOs in global relief and development, or campaigning for evangelical voters in the U.S., religion proliferates in our newspapers and magazines, on our radios and televisions, on our computer screens and, increasingly, our mobile devices. Americans who assumed society was becoming more and more secular have been surprised by religions’ rising visibility and central role in current events. Yet this is hardly new: the history of American journalism has deep religious roots, and religion has long been part of the news mix.

Providing a wide-ranging examination of how religion interacts with the news by applying the insights of history, sociology, and cultural studies to an analysis of media, faith, and the points at which they meet, The Oxford Handbook of Religion and the American News Media is the go-to volume for both secular and religious journalists and journalism educators, scholars in media studies, journalism studies, religious studies, and American studies. Divided into five sections, this handbook explores the historical relationship between religion and journalism in the USA, how religion is covered in different media, how different religions are reported on, the main narratives of religion coverage, and the religious press.

CRCC University Fellow Diane Winston edited the book and Senior Director or Research and Evaluation Richard Flory is the author of the chapter titled, “A New Religion for Modern Times: American Journalism and Religion, 1870-1930.”

Diane Winston is a university fellow with the USC Center for Religion and Civic Culture.

Since 2016, CRCC has shared the trends in religion and society that we see shaping the coming year. What started as light-hearted predictions has grown more ominous over the years. Anybody surprised ...
Audio

This radio documentary was originally produced by KALW’s The Spiritual Edge, with the support of CRCC’s global project on engaged spirituality.  To hear this and other profiles, subscribe to The Spiritual Edge podcast in ...
Athar Ahmad
Report

PC Magazine: Quraishi on the Possibility of Productive Online Conversations

Are productive online conversations possible? According to Amanda Quraishi, founder and director of the Institute for Digital Civic Culture (IDCC), they’re not only possible, but crucial. PC Magazine interviewed Quraishi on designing ...