Why the Black Church Should Support Asian Lives Matter

Why the Black Church Should Support Asian Lives Matter

The below post was originally published by The Christian Recorder and The LA Sentinel. The Rev. Mark Whitlock wrote it with Hyepin Im, CEO of FACE and an alum of the USC Cecil Murray Center for Community Engagement.

Rev. Mark Whitlock: I watched the news reports of Robert Aaron Long, a 21-year-old White supremacist who went on a rampage at three spas in the Atlanta, Georgia area, killing six women of Asian descent and two others. I posted the question on Facebook: Why should the Black Church support “Asian Lives Matter”?

The question wasn’t prompted by animosity, despite the disagreements between the Asian and African American communities. To my surprise, very few of my clergy Facebook friends responded.

Some remember the shooting death of 15-year-old Latasha Harlins in Los Angeles on March 16, 1991, by convenience store owner Soon Ja Du, a Korean immigrant. This senseless killing laid the foundation of anger and resentment that would eventually explode into the worst civil unrest in America after the acquittal of the police officers who beat Rodney King.

Mrs. Du was convicted of voluntary manslaughter, but her suspended sentence—five years of probation, 400 hours of community service and a fine—enraged much of L.A.’s Black community and the world.

The media has fanned the flame of anti-Black sentiment and reignited conversations on Black-Asian conflicts. Because some of the videotaped offenders have been Black, some observers immediately reduced anti-Asian violence to Black-Asian conflict. While Rev. Al Sharpton has spoken up, there has been a deafening silence from the Black Church.

I, too, have been silent until Hyepin Im, founder and CEO of Faith And Community Empowerment (FACE), called. The mission of FACE is to empower faith community leaders to better assist underserved communities. FACE trains faith leaders, educates underserved communities and provides advocacy so that the voiceless may have a voice.

Hyepin Im: I reached out to Rev. Mark Whitlock as he has been a longtime mentor who has always welcomed me into his fold. As an Asian American, this past pandemic year has been wrought with much pain including suffering from two viruses – the corona virus as well as the hate virus.

The dominant powers in this country have set the gameboard where different communities are pitted against one another.

With more than 6,600 reported hate incidents against Asians to-date, the daily barrage of attacks that doesn’t seem to be abating has brought new terror and fear. For the first time in my 47 years in the U.S., I find myself along with so many other Asian Americans, carrying a new level of burden when we go out into the public. Even in a recent outside dining, I couldn’t help but feel vulnerable that I could be an open target just because of my Asian identity.

Despite our cries for help, it finally took the Atlanta massacre that killed six Asian lives and two others to finally catch the world’s attention. Even then, I and other Asian Americans couldn’t help but feel the outrage when the police that seemed to justify the perpetrator’s reference to these victims as a “temptation” that needed to be eliminated. The distorted mainstream media coverage just reinforced the experience of Asian Americans being erased and demonized.

The dominant powers in this country have set the gameboard where different communities are pitted against one another with myths that we tell of “the other.” Contrary to the model minority myth, many Asian Americans suffer from the same racist system that hurts all communities of color. Thus, it pained me that the recent optics of crimes of Black-on-Asian communities is fueling dangerous sentiments and animosities. 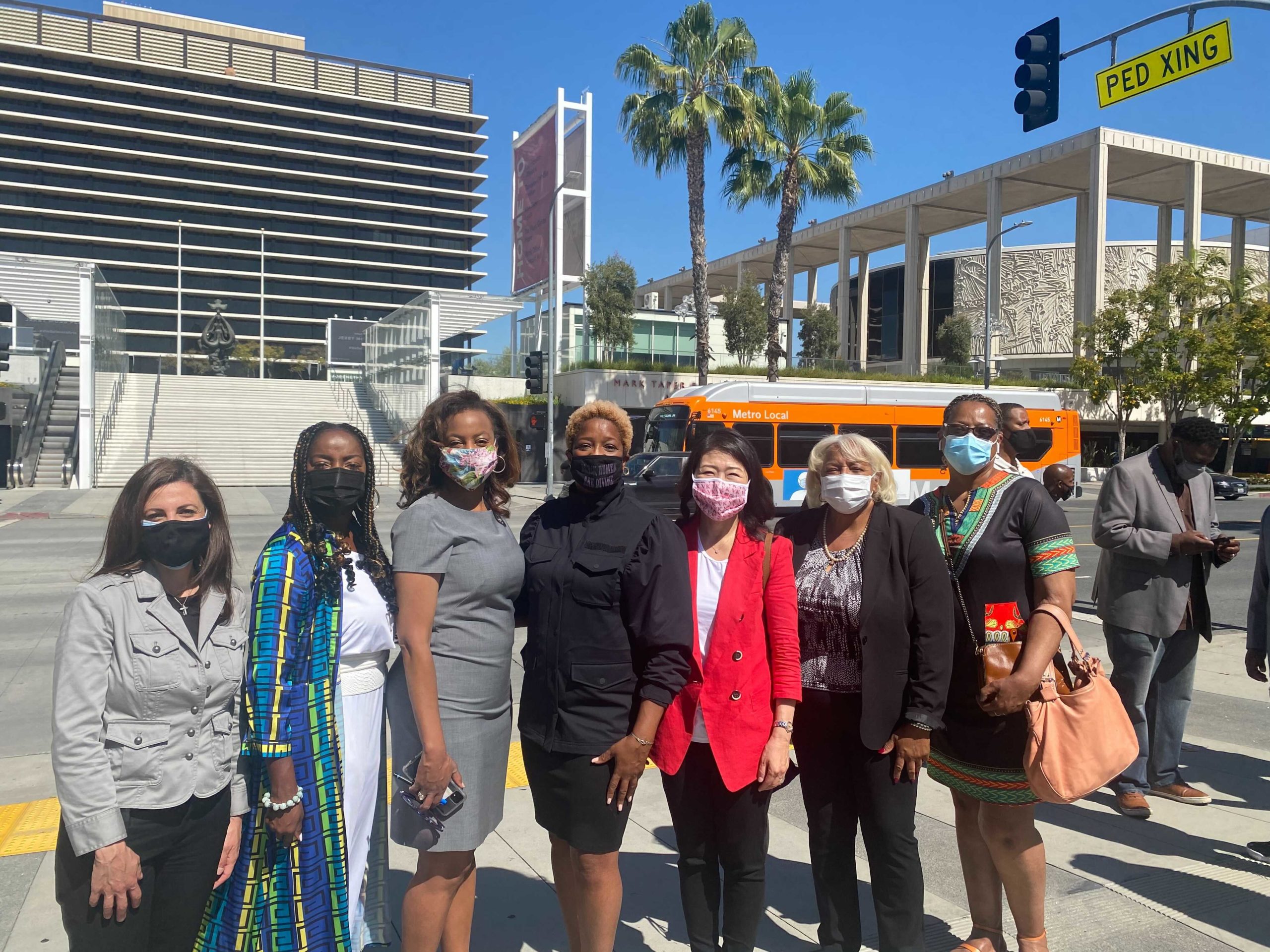 Hyepin Im with Najuma Smith-Pollard (program manager with the USC Cecil Murray Center) and other community leaders at a press conference ahead of the verdict being announced in the trial of Derek Chauvin for murdering George Floyd.

Until recently, one area that I held close to my heart was my discomfort with how Black leaders would view Asian storeowners. I felt this chasm – that seemed impossible to bridge – in building understanding. However, with the Atlanta Massacre, I saw a God-given opportunity to build solidarity as so many allies especially from the Black community raised their voices for support. Thus, I reached out to Rev. Mark for his help.

Rev. Whitlock: I have known Hyepin for 30 years, and I felt uncomfortable dealing with the Black-Asian conflict. I prefer to engage this type of matter behind closed doors. Hyepin proposed a public discussion with Asian clergy and Black pastors. Frankly, I was blind to the problems of the Asian community. She opened closed eyes. Nonetheless, I accepted the invitation.

When I attended the Zoom call, Hyepin immediately made me feel very welcomed. There were some familiar pastors on the Zoom call, and people of various ethnic groups, genders and age ranges.

Hyepin asked me share my feelings. I had intended to slip into the safe, non-confrontational background, but she pulled me to the forefront of the call.

I was out of my comfort zone and afraid of being outed by other clergy for having a bias against Asians. I was filled with doubt for even coming! My mind raced for a means of escape, but I have worked in the ministry of a social justice for 30 years. The African Methodist Episcopal Church is known for marching and speaking truth to power. I reluctantly accepted the offer to share and offered my feelings about Asians.

Hyepin Im: I must admit that I had my own fears and prayed a lot before the meeting, asking God to open hearts and eyes to see the truth. The first and subsequent conversations have been so powerful and healing in building trust. I know that God was in our midst when one of the faith leaders, Dr. Barbara Williams Skinner, stated, “I just didn’t know much about the Asian community. We need to start connecting and stop hating.” Others wholeheartedly agreed. Praise the Lord!

Rev. Whitlock: As I started sharing, I was surprised at how comfortable I felt. Following the comments, I discovered the meeting was much more about fellowshipping than organizing a public protest. It was a method of bringing the community together. And the members of Asian community wanted to partner for progress and peace.

Yet, there was even more significance to my reflections. I was a representative of the AME Church, a mainline denomination, endorsing Asian Lives Matter. An old civil rights organization was partnering with a new method of civic engagement. It was a moment of healing the Asian community and opening the doors for a new partnership with the Asian community. And it was, for me, confirmation that I need to stay involved with ALM.

Hyepin Im: I know that when I embarked on this journey, I felt quite small and fearful in such an undertaking. I praise God for His faithfulness. Just as Bezalel and Oholiab were prepared by God to stand with Moses, so many amazing leaders have contributed their gifts for a new chapter and new season of seeing truth of one another and building solidarity between our communities.

Mark 12:31 reads, “And the second is like, namely this, Thou shalt love thy neighbor as thyself. There is none other commandment greater than these.” (KJV)

Mark Whitlock is a contributing writer for the USC Center for Religion and Civic Culture.

Read more about: Black Church, Race and Culture, Violence
CRCC in the News

“An individual does not exist,” Jaime Martínez Luna, a Zapotec intellectual (pictured in yellow jacket), told me as we shared coffee in his kitchen in the small mountain village of San Pablo ...
Magdalena Rojo and Noel Rojo
CRCC in the News

The March 16, 2021 killing of six women of Asian descent and two others brought Asian Buddhists together across lineages and communities to confront anti-Asian hate. A year later, the LA Times ...
Commentary

By Addison Baker Addison Baker is an undergraduate student at The University of Puget Sound in Tacoma, Washington. Addison spent time researching the Black Lives Matter movement, along with healing modalities and ...
CRCC in the News

“An individual does not exist,” Jaime Martínez Luna, a Zapotec intellectual (pictured in yellow jacket), told me as we shared coffee in his kitchen in the small mountain village of San Pablo ...
Magdalena Rojo and Noel Rojo
Article

Munther Isaac: What Would Jesus Do at an Israeli Military Checkpoint?

This article was originally published by Religion Unplugged, with the support of CRCC’s global project on engaged spirituality. BETHLEHEM— In the Evangelical Lutheran Christmas Church in Bethlehem, a stained glass window depicting ...
Naomi Zeveloff
CRCC in the News

The March 16, 2021 killing of six women of Asian descent and two others brought Asian Buddhists together across lineages and communities to confront anti-Asian hate. A year later, the LA Times ...
Read this next

CRCC’s Rev. Dr. Najuma Smith-Pollard was interviewed on ABC7 News about Black History Month. “It’s about having the mindset of we and us, not just me and myself alone,” Smith-Pollard said. “Black ...