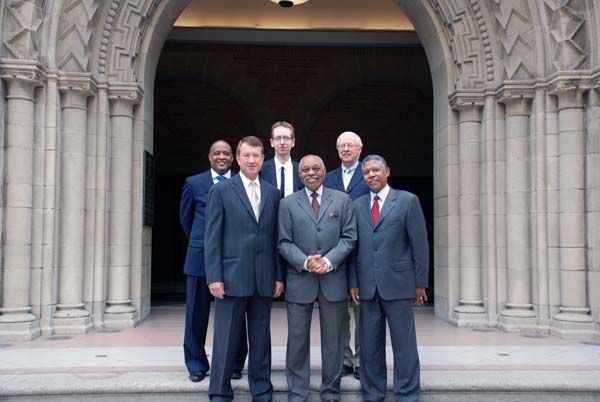 Los Angeles, Calif. (September 21, 2010)—The Center for Religion and Civic Culture, housed in the University of Southern California College of Letters, Arts & Science, has received a $25,000 grant from Comerica Bank to support the Cecil Murray Center for Community Engagement.

Named after the Rev. Dr. Cecil “Chip” Murray, the Murray Center aims to spur economic development and assist faith-based organizations in efforts to transform local communities. After retiring as senior pastor of the influential First African Methodist Episcopal (FAME) Church in South Los Angeles, Murray joined the USC faculty in 2005 as the holder of the Tansey Chair in Christian Ethics. Murray also became a senior fellow in the Center for Religion and Civic Culture and partnered with the center to launch programs that provide training and technical assistance on civic engagement, community and economic development, and violence prevention. The new Murray Center is an outgrowth of these activities.

“The gift by Comerica Bank will significantly advance our capacity to develop the Cecil Murray Center for Community Engagement,” said Donald Miller, professor of religion and executive director of the Center for Religion and Civic Culture. “We believe this center will play an important role in incubating small businesses and addressing community needs, especially in low-income neighborhoods.”

The Rev. Mark Whitlock serves as director of the Murray Center. Whitlock has collaborated with Murray on numerous projects and the two worked to raise more than $400 million to build housing and increase economic opportunities in South Los Angeles through FAME Renaissance. “The Murray Center continues the legacy of Rev. Murray’s outstanding contributions to Los Angeles,” said Whitlock.

“Comerica Bank is honored to provide support to the Cecil Murray Center for Community Engagement,” said Don Kincey, vice president of public affairs. “We have tremendous respect for the staff and their commitment to helping local communities. They provide the kind of education and tools that enable people to improve their lives and build stronger neighborhoods.”

About Comerica Bank
Comerica Bank, founded 161 years ago, is a subsidiary of Comerica Inc., based in Dallas. Comerica focuses on relationships, and helping people and businesses be successful. Comerica reported total assets of $55.9 billion at June 30, 2010. Comerica Bank has confidence in the economy and the future of Los Angeles County, where it has more than doubled its number of banking centers in five years to 27 locations. Comerica Bank’s middle market group, headquartered in downtown Los Angeles, serves manufacturers, exporters, distributors and wholesalers, especially those that are privately owned and/or owner-managed. The Entertainment Group, based in Century City, provides financing and banking services for the independent film industry. The bank’s national title and escrow business is based in El Segundo. Wealth & Institutional Management, Treasury Management, Commercial Real Estate and Small Business Banking groups serve customers throughout Los Angeles.

Read more about: CMCCE
CRCC in the News

Faith leaders are among those calling for accountability after the revelations of racist comments in a conversation between some of Los Angeles’ top Latino political leaders. The Rev. Dr. Najuma Smith-Pollard spoke ...
Video

The Rev. Dr. Najuma Smith-Pollard hosted a conversation with Ida Puliwa, a social entrepreneur and community organizer from Malawi and a “Spiritual Exemplar,” profiled as part of the Center for Religion and ...
Announcement

The Rev. Dr. Cecil L. “Chip” Murray announced his retirement from his second career—as Tansey Professor of Christian Ethics and chair of the Cecil Murray Center for Community Engagement—at the University of ...
CRCC in the News

Vice President Kamala Harris recently hosted a roundtable with faith leaders on the state of reproductive health care in the United States. The event, held at the Los Angeles County Federation of ...
Najuma Smith-Pollard