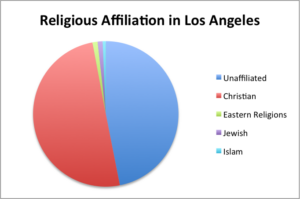 About half of the adult population in Los Angeles identifies with some established religious institution, which makes L.A. more traditionally religious than other big coastal cities like New York City or San Francisco, but much less religious than Middle American metropolises such as Chicago, Dallas or Atlanta. (Source for pie chart.) 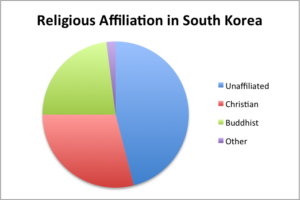 South Korea’s adult population (which resembles Seoul’s population) is also divided about evenly between “nones” and people who adhere to some conventional form of religious practice or belief. But that’s where the comparison with L.A. becomes more complicated—and interesting. (Source for pie chart.)

Seil Oh, a research associate on the RCCI project and professor at Sogang University in Seoul, is currently studying the unaffiliated in Seoul. Oh’s dissertation research at Boston College also focused on some of the trends that were becoming apparent among American “nones” in the Northeast a decade ago.

“There were already many unchurched believers,” said Oh, pointing to a phenomenon that makes “nones” in the U.S. different from their counterparts in South Korea, where disaffiliated adults tend to express no interest in any kind of spiritual belief. “In America the discourses around spirituality versus religiosity have been driving efforts to explain the beliefs and behaviors of unchurched believers.”

Young people at #nightmarket in #Seoul on the left & Share-A-Meal, a #LosAngeles #service group, on right. Roughly equal percentages of #Millennials are religious “nones” in #SouthKorea and the U.S., but disaffiliation plays out differently in each country. #Korean “nones” tend to find meaning and identity through consumer culture and their careers. #American “nones” tend to be #spiritual seekers, many of whom are drawn to religiously fluid service groups like Share-A-Meal. #ReligioninSeoul #ReligioninLA

Why are “nones” in the U.S. typically more interested in non-institutional forms of spirituality like yoga, meditation and energy healing than their counterparts in South Korea? The influence of war and authoritarianism on Korean culture as well as the interplay between Protestantism and capitalism in Korea’s post-war economic development are all key factors in that very complex equation.

After the end of open warfare on the Korean Peninsula in 1953, nominally democratic South Korea suffered through a series of coups and authoritarian regimes until the 1980s. During those decades of instability, the South also experienced an influx of capital from the U.S., along with waves of Protestant missionaries who dramatically increased the religiosity of a populace that had been largely indifferent to its ancient Buddhist culture and small Christian minorities before the war. But during the country’s rapid industrialization all of that changed.

“Workers left rural areas for Seoul to earn money,” said Oh. “Whether they had their own religion or not, they became Protestant to get support from the local church.”

Then, in the pivotal year of 1987, a student leader of Seoul National University’s pro-democracy movement died during a brutal interrogation at the hands of government security personnel. The student’s death became the rallying point for millions of protestors around the country who compelled the ruling party to allow for the direct election of the country’s president.

The democracy movement in #SouthKorea attracted a broad coalition of supporters, including leaders from the country’s #Buddhist, #Catholic and #Protestant minorities. But the flashpoint for many of the protests leading up to the June 1987 Democratic Uprising was Sillim-dong, an enormous student enclave near #Seoul National University. This photo in an exhibit captures the student #protests. In the decade following democratic reforms, Buddhist and Catholic institutions were seen as sources of moral authority, though stories of corruption at #evangelical megachurches began to diminish the moral cache of #Korean Protestantism. #ReligioninSeoul

The heyday of South Korea Protestantism occurred between the advent of full democracy in 1987 and the turn of the millennium. Megachurches like Yoido Full Gospel flourished, and the percentage of disaffiliated adults dropped from about 90 percent at the end of the Korean War to 50 percent.

While it might seem that religious affiliation rates in Los Angeles and Seoul are heading in opposite directions, Christianity may have reached its saturation point in Korean culture. The entanglement of Protestantism and capitalism in South Korea has proved to be a poor bargain for Protestant Christianity: At start of the 2000s, stories of corruption began to taint the reputations of many Korean megachurches, including Yoido, and the appeal of the faith began to diminish for the country’s millennials.

“In American culture,” Oh said, “youth don’t go to church, but they’re still spiritual. The majority of South Korean youth are not interested in spiritual life at all. They’re more interested in material life, secular life.”

In addition to churches & temples, we also saw #Seoul’s secular culture, including its many cafes. Here’s the #cat #cafe, plus a few more in the same building. #ReligioninSeoul

Oh sees that difference as a consequence, in part, of the deep history of civil religion in the United States—a country wrested from its indigenous inhabitants by ardent colonial religionists and founded on the notion that citizens could believe whatever they want, as long as they believed in something. Without a similar interweaving of national and religious identities, South Korea has instead made a civil religion of the free-market capitalism that defined its identity during the Cold War.

Still, even if the current cohort of South Korean “nones” lacks the impulse toward spiritual seeking that defines their counterparts in the U.S., Oh believes their children will begin to look for deeper existential meaning than the latest K-Pop tune or digital gadget can provide.

Korean youth culture seems vibrant on the surface—Seoul’s abundant and affordable cafés, restaurants and clubs are filled with young people, and the quirky exuberance of K-pop influences fashion and advertising as well as music. But South Korea also has one of the highest suicide rates in the world. The crisis that prompts a turn toward religiosity may not be in Seoul’s future—it may be happening right now.

Even as religious affiliation continues to decline, CRCC’s research on religious creativity and innovation has found groups that are thriving across religious traditions. While not necessarily large (though some are), these groups ...
CRCC in the News

The USC Center for Religion and Civic Culture (CRCC) recently held its first in-person event since the start of the COVID-19 pandemic in late 2019. More than 70 clergy and faith-inspired community ...
Nick Street
Article

This article was originally published by Jamhoor. “Except for the home crowd cheering for our national team at an international cricket match, it was the first time I was seeing Sri Lankans ...
Nalika Gajaweera
Commentary

As a part of CRCC’s research on religious competition and creative innovation, the CRCC team traveled to Korea to see how religion is changing there. Seoul provides a comparison case for Los ...