Knowing with the Heart

If you join Joanne Tolkoff for a Shabbat service at Nefesh, her spiritual home, you won’t be doing much sitting.

Tolkoff and roughly 100 other congregants are attracted to the twice-monthly Shabbat by its vibrant, often ecstatic spirit. While attendance at the Friday night Jewish services is declining in many synagogues, Rabbi Susan Goldberg brought new life to the Shabbat observance at Wilshire Boulevard Temple, where she incubated Nefesh before moving the group to Silverlake Independent Jewish Community Center. Nefesh’s Shabbat services have the music-driven feel of a tent revival. And Tolkoff wants to be as close to the action as possible, in the front row with her hands in the air as she grooves to the band.

“I have touched that thing that’s beyond words for myself.”

“Any place probably thinks that they’re authentic, right?” Tolkoff said. “But I’m more of a devotional character type, where I need to feel a connection to the Divine. So, for me, when I experience that in a service, then I think it’s authentic. Like I have touched that thing that’s beyond words for myself.”

Tolkoff’s story is about the search for an “authentic” religious experience, one that she has found in an embodied spiritual practice and a community—Nefesh—that supports it. Tolkoff, 60, works at as a PR person and digital learning designer for a Reform Jewish seminary in Los Angeles. Her involvement in Jewish life, both professionally and spiritually, is surprising considering her upbringing.

“We were Jewish culturally,” Tolkoff said, “but not religiously at all. My parents were both atheists, my mother militantly so.”

Her family was living in New York City when Tolkoff was born. When she was 10, they moved to a town on Long Island where there were no other Jewish families. Tolkoff had some exposure to the town’s Christian culture, but didn’t connect with it.

“I played guitar, and whoever was teaching me the guitar belonged to a church,” Tolkoff recalled. “I remember going to a church and helping them with their service, and just being relieved that I didn’t have to do that every Sunday.”

“It was mostly for the gifts and all of that,” Tolkoff said. “We even had a fake tree! I really grew up extremely confused.”

As a teenager, Tolkoff started doing Tai Chi and learning meditation practices derived from Buddhism and Taoism. The innate sense of spiritual longing that led her to Eastern religion evolved into a career in experimental theater when she was a young adult.

“Tai Chi was kind of the gateway,” she said. “That’s where I first had that sense of timelessness and, you know, oneness and unity. And I experienced that on and off in theater, when I would have those experiences sometimes when I was acting or on the stage.”

Tolkoff settled in New York City, where she dabbled in shamanism and different styles of Buddhist practice. She eventually married an academic and moved with him to a university town in Kansas, where she joined a group that was studying Advaita Vedanta, a form of non-dual philosophy in Hinduism.

She had to travel far from her roots, both geographically and spiritually, before she felt the call to come home.

“I found after a while with non-duality that it was all in the head,” Tolkoff said. “And I started to naturally seek something that would actually get to my heart.”

After her marriage ended, she returned to New York and found her way to Romemu, a Jewish renewal congregation. She had been to a synagogue only once or twice before. But from the moment she arrived at Romemu, she knew her years of spiritual seeking were finally bearing fruit.

“I walked in and I had one of those like, incredible ah-ha moments which I’d never really had, religiously speaking,” Tolkoff said. “I was extremely emotional. I mean, the woman handed me the prayer book, the siddur, and I started to want to cry and I was like, wow, what is this?”

“I started to naturally seek something that would actually get to my heart.”

Tolkoff added, “I’d never walked in off the street to a Buddhist sitting or meditation and had my heart open up quite this way. It was the first time I realized that, like, this is what I need.”

Still, the renewal culture at Romemu included the exploration of “different spiritual modalities,” both Jewish and Dharma-based. This allowed Tolkoff to integrate the practices she had cultivated since her teenage years into a deeply heartfelt reclaiming of her Jewish identity.

Tolkoff said, “I still consider myself a Jew-Bu,” someone who interweaves elements of Jewish and Buddhist spiritual practice.

Tolkoff had to return to her roots to find authenticity, even as her experiences with other traditions continued to resonate with her. Ultimately, her own experience, not the authority of a rabbi or Dharma teacher, served as the arbitrator of what counted as “authentic.”

In 2012, after she had been attending services at Romemu for about six months, Tolkoff relocated to Los Angeles to care for her father, who had moved to California after her mother died. She explored several Jewish congregations and became a member of Nefesh in 2015. 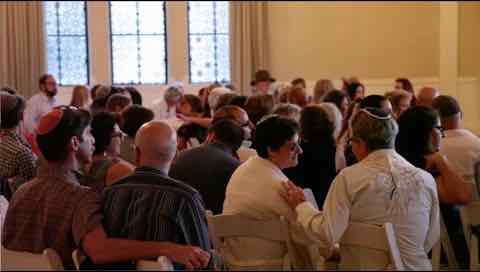 “I feel like I belong for the first time in my life,” Tolkoff said. “The nice thing about Nefesh is that I feel like it’s my tribe. I look around the room and I see just a great mix of everything, from LGBTs to young families to artists to just everything. It feels very open compared to some other synagogues I’ve been in.”

An essential part of the community is the visionary leadership of Rabbi Goldberg. “The person leading the congregation – probably in this case it’s a rabbi – is actually experiencing [the Divine] as well,” Tolkoff said. “And I’m sort of tapping into that greater experience that we’re all having. So, I have to feel that my leader is also authentic—that they’re experiencing it and they’re helping me get there.”

Goldberg, who is trained in dance and other forms of body-focused practice, tries to get the congregation to have an embodied spiritual experience. “It’s more heart than head for sure,” Tolkoff said, “But, you know, it’s hard to get some people to even stand up during service!”

For Tolkoff, the reward for being on her feet and rocking to the spiritual jam at Nefesh is nothing less than intimacy with the Divine.

“My return to devotional Judaism has allowed to feel like I was in love with God and with life,” Tolkoff said. “Which is something I never could have said before.”