Survivors: An Oral History of the Armenian Genocide

Survivors: An Oral History of the Armenian Genocide 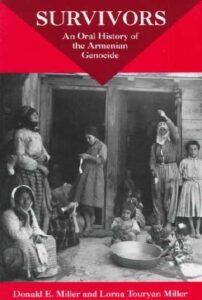 Between 1915 and 1923, over one million Armenians died, victims of a genocidal campaign that is still denied by the Turkish government. Thousands of other Armenians suffered torture, brutality, deportation. Yet their story has received scant attention. Through interviews with a hundred elderly Armenians, Donald and Lorna Miller give the “forgotten genocide” the hearing it deserves. Survivors raise important issues about genocide and about how people cope with traumatic experience. Much here is wrenchingly painful, yet it also speaks to the strength of the human spirit.

In the rugged landscape of the Kotayk Province of Armenia, Geghard Monastery rises from an amphitheater of steep cliffs like a revelation. Even the long trek to the monastery complex, surrounded by ...
Priyadarshini Sen
Article

This article was originally published by Religion News Service, with the support of CRCC’s global project on engaged spirituality.  YEREVAN, Armenia (RNS) — Home for Lara Aharonian is this capital city whose architecture ...
Priyadarshini Sen
Commentary

This article was originally published in The Christian Science Monitor, with the support of CRCC’s global project on engaged spirituality.  MAIDUGURI, NIGERIA — One morning in May, Zina Mustapha stood before her 20 ...
Innocent Eteng