Timothy Cardinal Dolan welcomed Pope Francis to “A Witness to Peace,” a multi-religious gathering at the National September 11 Memorial and Museum, by telling him, “We in New York are sinners.”

“But,” he added, “one of the things we do very well is sincere and fruitful inter-religious friendship.”

In Foundation Hall, hundreds of New York City’s senior religious leaders and a few dignitaries gathered beneath what was once the North Tower of the former World Trade Center. Like me, many in attendance had worked at Ground Zero and subsequently on 9/11 recovery for some or all of the last fourteen years.

Many in the hall had intentionally not returned to this space, and may not have, had it not been for this most unique invitation to sanctify it together with an authentic and prophetic voice for reconciliation, healing and hope. The humble Francis has earned the title Pontifex Maximus, great bridge builder. 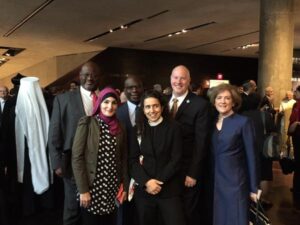 To be present in that void with so many colleagues in ministry felt like a collective step into sacred time and space. It was not a staged event with a token group of religious leaders, but an intentionally inclusive convocation. Seeing Pope Francis was made all the more special by seeing him listen to the Buddhist, Christian, Hindu, Jewish, Muslim and Sikh prayers of New York religious leaders who are personal friends and colleagues.

In bringing us together, Pope Francis lifted up the true 9/11 narrative – one no longer heard in our nation. Although 9/11 took place at the hands of religious extremists, New York City’s faith communities united in its aftermath to bring healing and hope to a traumatized city and nation – including our trusted and valued Muslim colleagues and neighbors.

Pope Francis spoke as if he had personally embodied the pain and suffering of the 9/11 victims and families – and our experience as caregivers. He understood what happened in this place wasn’t merely something historical or an event that inspired a patriotic response; it was the best and worst of the human experience.

Fourteen years after 9/11, major religious leaders, presidential candidates and elected officials have replaced the narrative of coming together with one that conflates Islam and terrorism. Many of our national leaders and the media willfully teach hate and seek power in dividing rather than uniting. A whole industry has developed around souring people’s attitudes toward a world religion that, like all faiths, is overwhelming peaceful and needs support to suppress its violent adherents.

The multi-religious gathering was made all the more poignant by its location at the National September 11 Memorial and Museum. Its leadership has refused the advice of its own interfaith advisory council to correct its narrative on Muslim extremism and include the narrative of New York City faith communities. Meanwhile, it supports the presence of known and outspoken anti-Muslim hate speech leader, Debra Burlingame, on its board.

New York is one of a few cities that serve as the crossroads of the world. We are proud of being multi-cultural and American, from our colonial days to Ellis Island, to today. About 1 million Muslims live in our city, about 10 percent of our population.

We are a jaded urban people, not prone to being idealistic or naïve. Most hold deep conviction about their religion and about geopolitical conflicts. At face value, this city could have easily turned into an interreligious conflagration after 9/11, where global conflicts and simmering hatred between religions could have exploded.

“In a metropolis which might seem impersonal, faceless, lonely, you demonstrated the powerful solidarity born of mutual support, love and self-sacrifice,” Pope Francis said. “No one thought about race, nationality, neighborhoods, religion or politics. It was all about solidarity, meeting immediate needs, brotherhood.”

I found the pope’s clear awareness of these stories affirming.

The room hung on every word in each prayer and every word the pontiff uttered. Heads nodded. Amens and yeses were softly spoken. With each prayer or song, those who shared the language quietly mouthed the words or sang along – but reverently, as not to overshadow those on the dais. 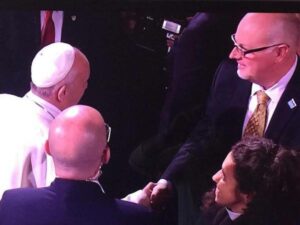 When I shook Pope Francis’ hand at the end of the gathering, I simply said, “Thank you for being here.”

I hope the world, and particularly Americans, were able to appreciate and hear the truth, its nuances and the bold messages spoken by the Pope and the other religious leaders. It would be a mistake to interpret these words as simply platitudes, niceties and religious tolerance political correctness.

The event was a reminder to me that we should be sharing our narrative in the face of growing ignorance and hatred fostered for political gain and profit in war. This pope has always taken the opportunity to speak truth to power. I can only hope this gathering might change hardened hearts toward peace and truth.

We were attacked together, we were resilient together, and we continue to heal wounds—together.

Peter Gudaitis is the president of the National Disaster Interfaiths Network (NDIN) and a contributing fellow with the USC Center for Religion and Civic Culture.