On a hilltop overlooking western Tunis, the whitewashed shrine of Syeda Manouba—a Sufi saint of the 13th century who defied tradition to become one of the early feminists of the Arab world—is a testament to Tunisia’s Sufi ancestry.

Badr Baabou, who has been targeted many times as a prominent Tunisian gay human rights defender, brought me here to understand his faith. He finds the spirituality of this temple’s matriarch, Zazuiya, nourishing and Sufism a “haven for his tired soul.” 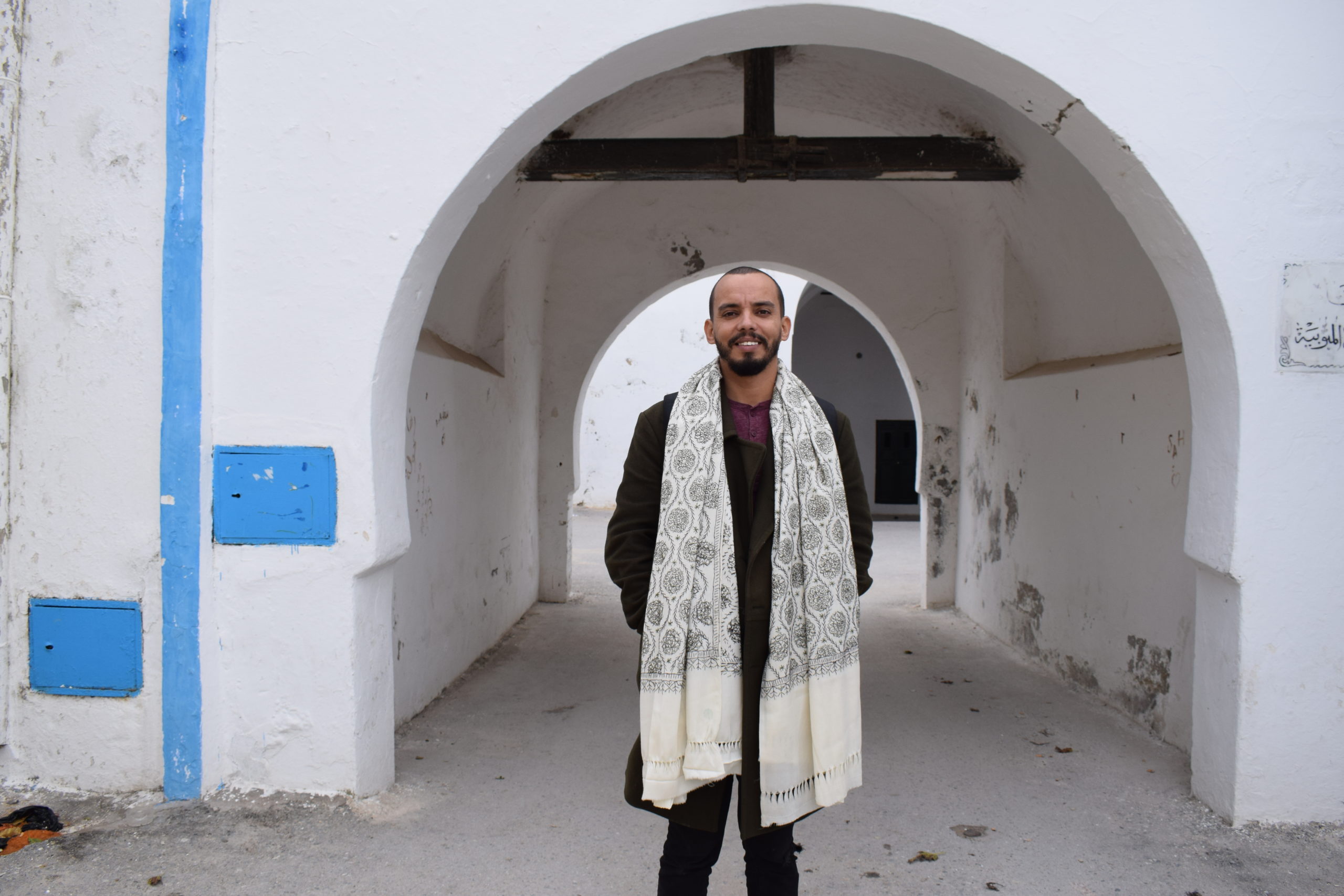 Sufi mysticism permeates the practice of Islam throughout Tunisia. But here at the shrine of Manouba, with women calling the citadel their own, it holds a special meaning.

From its expansive courtyard where elderly women sell candles, henna and incense sticks to the inner chambers of the shrine throbbing with Sufi rituals and dance, the centrality of the divine feminine imparts a unique touch to the seeker’s mystical voyage.

Three women caretakers escorted Baabou and me through the Syeda Manouba shrine’s serpentine corridors. The scent of henna from fresh fingerprints on the wall mingled with musk-rose incense as we entered the Sufi inner world.

We were ushered into Aunt Zazuiya’s palely lit room. Known to be a lover of scent and spirit, the 80-year-old matriarch and the oldest saint of the shrine had a knot of women around her who were taking turns to ask her blessings.

I found a place on a frayed rug at her feet to be in the ambit of this stout woman with a mystical radiance emanating from her. Zazuiya chanted in Arabic and smiled intermittently as I touched her feet. She welcomed me into Manouba’s inner world—a refuge not only for women, but for the distressed, poor and homeless, and persecuted sexual minorities.

I felt myself drift into the Sufi world of inner consciousness in the presence of these women.

In broken English, an elderly devotee explained how Zazuiya’s faith in Manouba’s revolutionary spirit had seeped into the shrine’s walls over centuries, transforming it into a living monument stripped of hate and discrimination.

Growing up in the 13th century, Manouba was a woman ahead of her time. She was unperturbed by social constraints and chose education, freedom and financial independence over a loveless marriage. She enrolled as a student of Abu al-Hasan-al-Shadhili, a prominent Sufi teacher who advocated gender equality.

Immersing herself in his teachings, Manouba soared to great intellectual and spiritual heights, choosing questioning over blind faith as the path to enlightenment. Her spirituality touched many lives and led to a radical transformation in social attitudes.

“It is Manouba’s spirit that Aunt Zazuiya wants to preserve,” said the devotee. “Aunty wants all women to consider themselves blessed and stand by each other.”

After blessing me one last time, Zazuiya summoned a caretaker who guided me to the shrine’s inner courtyard where believers were immersed in the Sufi hadra rituals.

The hadra supererogatory rituals, which involve ecstatic dance and invocation, are meant to shake loose all that you’ve become so that you remember who you were supposed to be.

My senses were awakened by these religious chants and ululations, rhythmic invocations and possession dance acts. While I was merely a bystander, I saw how they affected a spiritual deep-cleaning in the women devotees who moved in and out of their trance state.

A woman wearing a sky-blue kaftan with intricate head-gear leaned in to tell me that hundreds of women visit the shrine every week to empower themselves spiritually.

“You see, Tunisia is an evolved society because of Manouba,” she said, her face brimming with delight. “But we still need spiritual growth to break rigid patriarchal molds.”

As the rhythmic intensity of the rituals increased, a devotee collapsed in a heap crying out to her sister who sprinkled rosewater on her forehead till she regained consciousness. 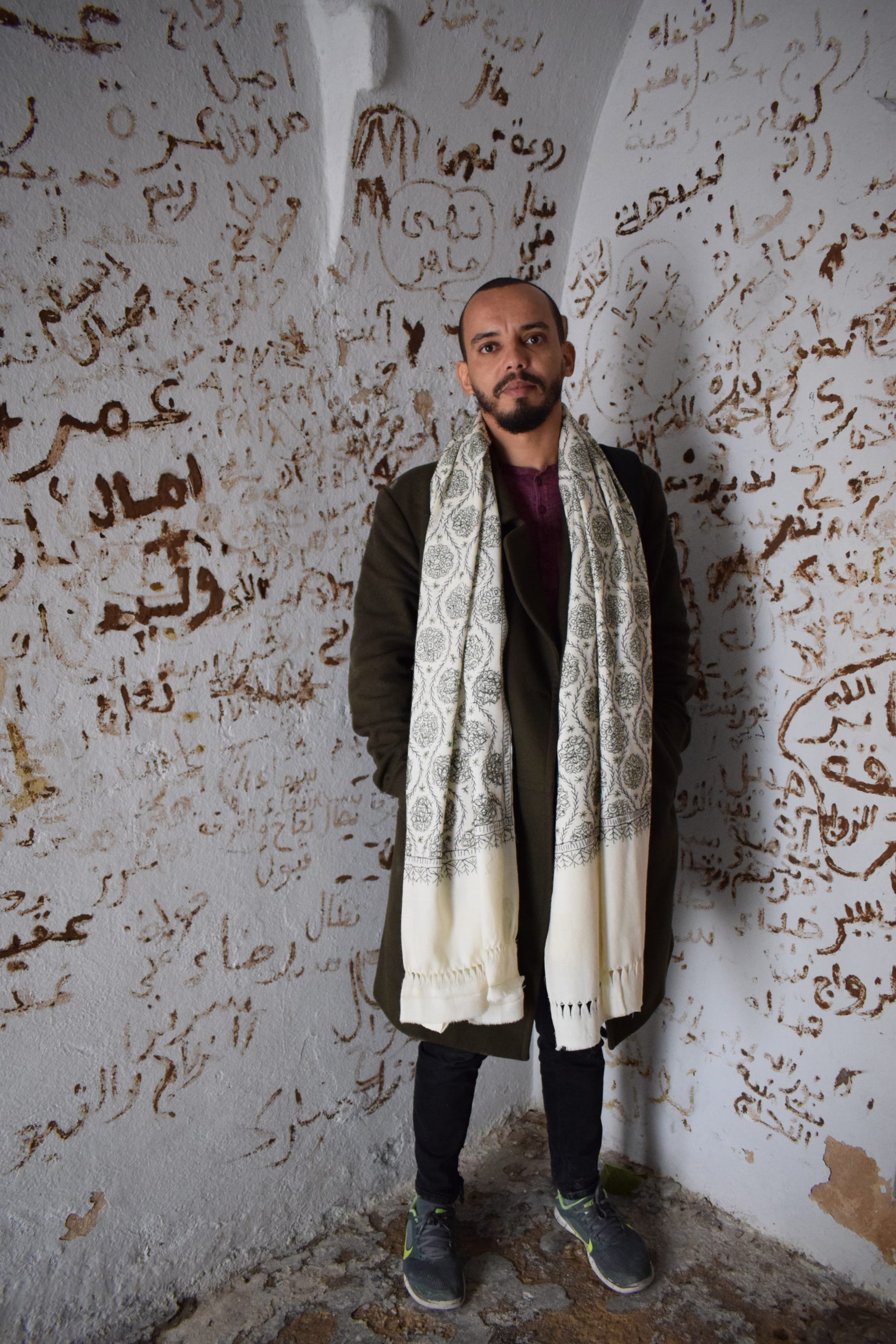 The audience celebrated the moment with ululations. They cried out that Hadra was not just an ecstatic dance, but also an intense spiritual and emotional release to come closer to Allah.

The drumbeats, dance and music stretched well into dusk, broken only by brief religious sermons in a sonorous voice. In the fading light, we gathered our things, paid our respects to Manouba, lit a candle and applied blobs of henna on the shrine’s wall as our imprints.

Serendipitously, I was in Tunisia at the time of Mawlid, the observance of the birthday of the Prophet Mohammad, when Sufi Tariqas (orders) hold forth on their spiritual ideals.

Over three days, Tunis and its surrounding towns and villages turns into a bustling Sufi pilgrimage site where stories about the life of the Prophet are narrated; food is distributed among the needy; Sufi hymns and dance are witnessed on street corners; and street processions with Tariqa leaders bearing colorful flags circle past mosques and shrines. 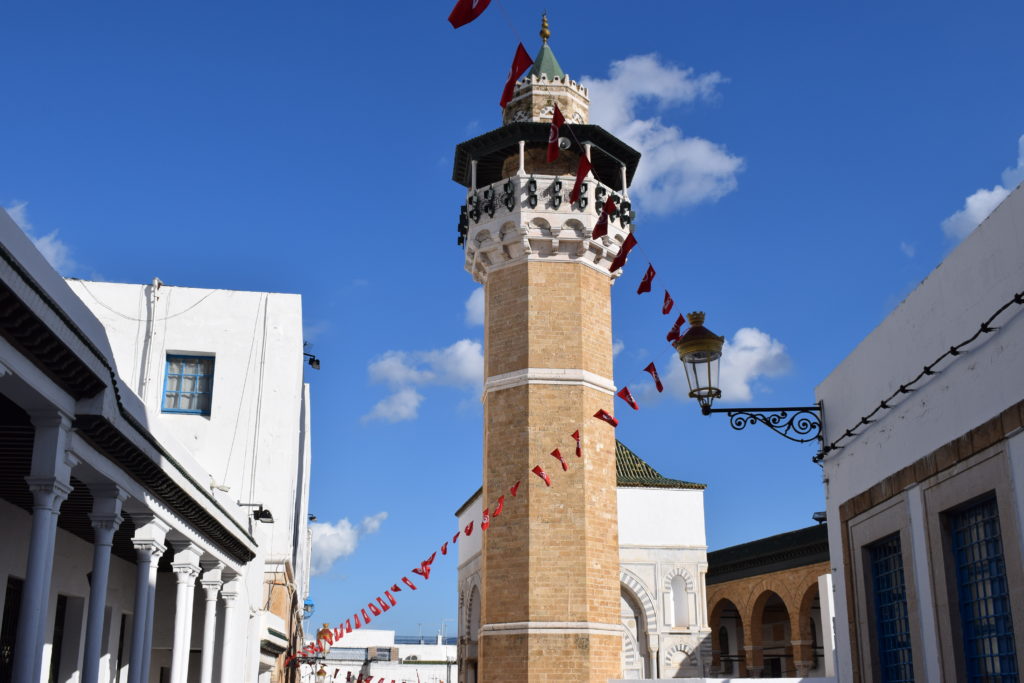 In Tunis’s medina, Baabou and I sat one evening for a concert by women Sufi musicians. Most of the medina (the old quarter of a city) is dotted with centuries-old mosques, mausoleums and madrasas. We sat at the end of a cobbled alleyway with coffee shops and a bustling bazaar a few meters away.

The women musicians were there to enchant the audience with sacred song rituals after their day-long pilgrimage to Sufi shrines scattered across Tunisia.

In her all-white djellaba and a tasseled shawl, the lead Sufi musician invoked the healing powers of Muslim saints through music-driven trance rituals. Ambient Sufism, as it’s called in the intertwined musical lives of ritual communities, held the audience captive for hours. 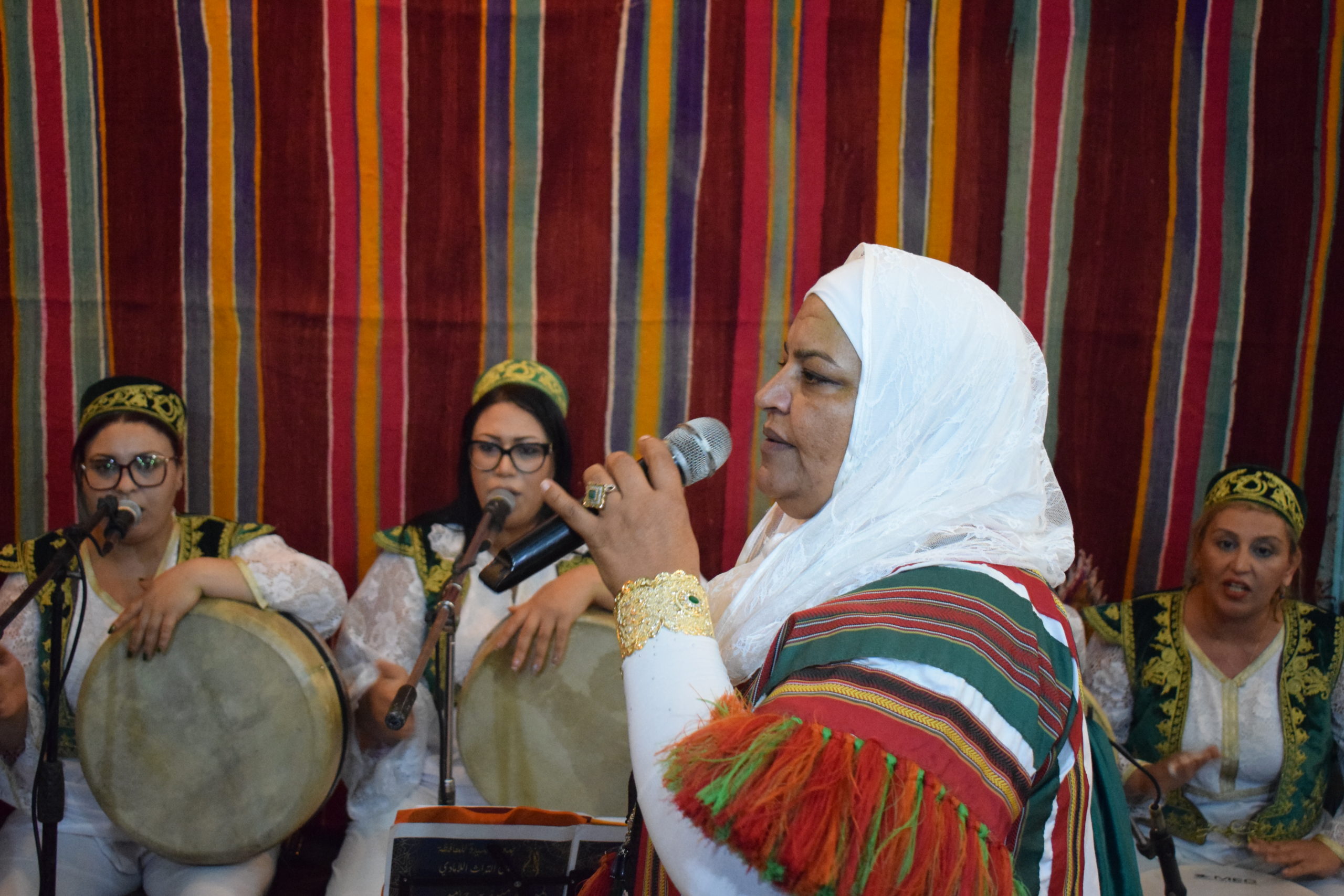 As a hypnotic wave passed over the audience, they rose from their seats, ululated, broke into possession dance acts, and even plunged into meditative silence.

Despite pressures from hardline Salafist groups and attempts to monopolize religious spaces since the 2011 revolution, Sufi women and musicians have held their ground.

They are seen as messengers of hope and peace, and act as buffers against conservative beliefs. Sufi women run shrines, supplicate alongside men and distribute food among the needy.

In the Prophet Mohammad religious procession the following day, women were held in high regard in the public sphere as they marked themselves as religious leaders, musicians, dancers, artists, philanthropists and agents of change in Tunisia’s fledgling democracy.

As the Sufi tariqas made their way through the medina’s serpentine alleyways, a middle-aged Tunisian man told me, “Women are the force behind our spiritual and social progress. They are headstrong, feisty and progressive.”

Across the North African country, I found streets, monuments, palaces and shrines named after women saints who played a critical role in shaping Tunisia’s rich Sufi legacy. Their spirit continues to inspire women today as they assert their independent voices. 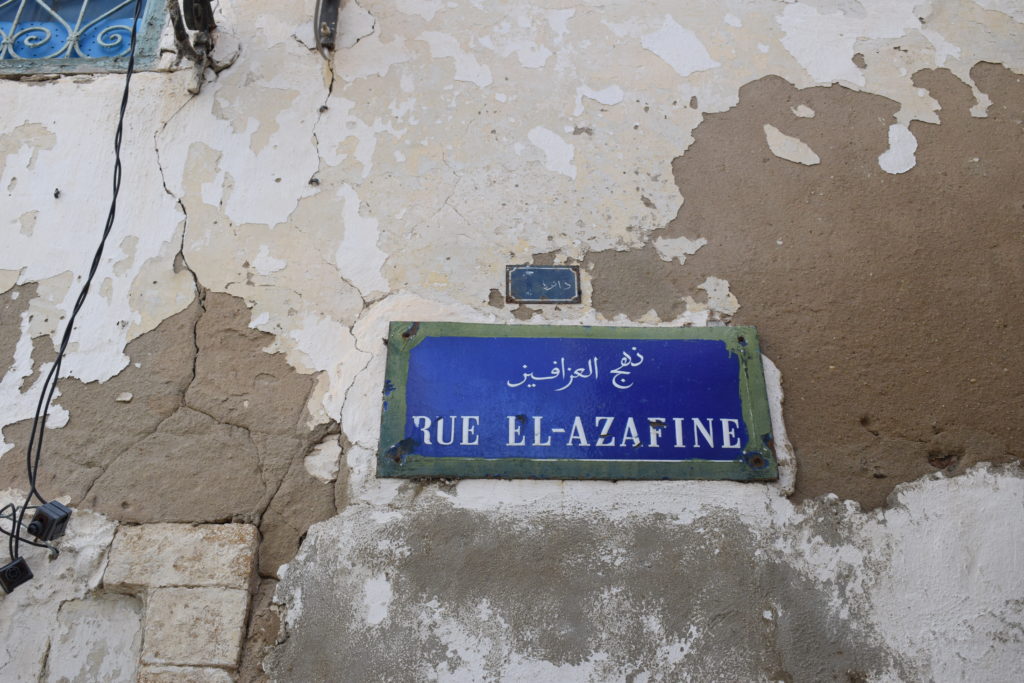 Discussions about reproductive rights continue to circulate in the religious community after the Supreme Court’s decision to overturn Roe v. Wade. CRCC’s Rev. Dr. Najuma Smith-Pollard and Richard Flory have been interviewed ...
Article

I had the chance to meet with two exceptional women for the USC Center for Religion and Civic Culture’s global project on engaged spirituality: Makvala Margoshvili and Marie Stella Kouak. They were ...
Clément Girardot