This article was originally published in The Christian Science Monitor, with the support of CRCC’s global project on engaged spirituality.

MAIDUGURI, NIGERIA — One morning in May, Zina Mustapha stood before her 20 students and wrote two mathematical problems on the whiteboard. “To solve these, you can use the coordinate formula or the vector formula,” she said.

As the teenagers chorused the formulas back at her, the scene could have been a typical high school in Nigeria. But the Future Prowess Islamic Foundation is unlike any other in Africa’s most populous country.

In the heartland of a war that has pitched the jihadist sect Boko Haram against the government, the private Quranic school has opened its doors to Muslim and Christian children of both insurgents and government soldiers, as well as those orphaned by both groups in the brutal conflict. Even as Boko Haram extremists raze and attack thousands of schools in the northeastern state of Borno, Zannah Mustapha, the school’s founder, preaches a different kind of radicalism: love for everyone.

Since 2002, Boko Haram has gunned down some 35,000 people and displaced 2 million in its battle to carve out an Islamic state in Nigeria, and to abolish perceived Western education and influence. In 2009, the group attracted global attention when it began attacking state symbols like military posts and public schools. Five years later, insurgents abducted 276 girls from their school dormitory in a remote village called Chibok.

But some teachers continue to defy them. 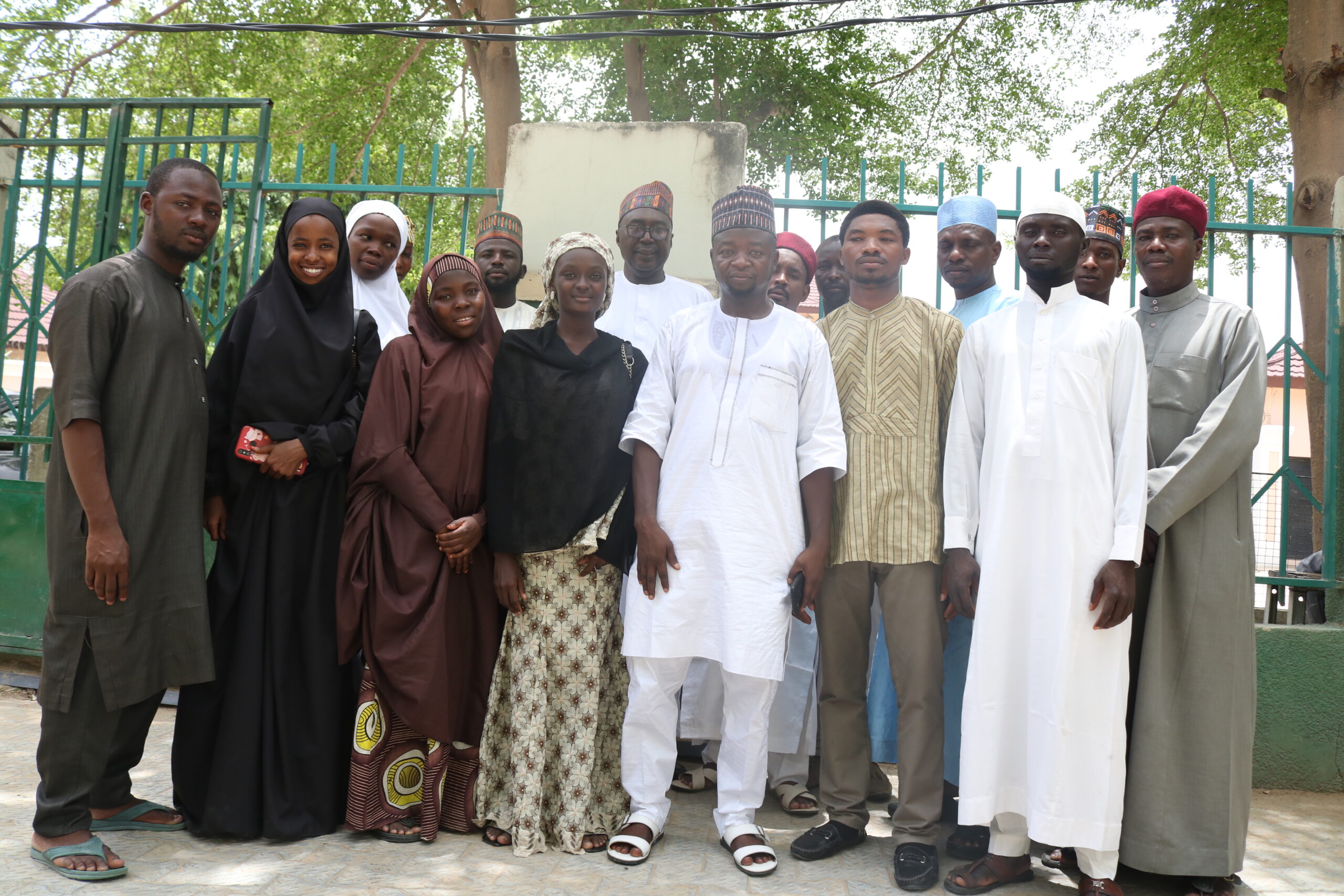 Zannah Mustapha with teachers of one of his primary schools.

In 2009, around the time Boko Haram turned its sights on education, Fatima was due to start first grade. But her mother couldn’t afford it, and 6-year-old Fatima was wrestling with a crushing sense of guilt.

She believed she was responsible for her father’s death at the hands of the extremists.

Bukar, her father, left home every morning for the market where he was a trader and returned at night, never failing to bring some candy for Fatima. One evening, Fatima was disappointed he’d forgotten. “I ran to welcome him, only for him to remember that he had not bought me my favorite candy,” she recalls.

Her father stepped back outside, but Boko Haram was trailing him. “They shot him in his head,” Fatima says. “That was the end of my joy – he never came back.”

For years, Boko Haram had killed those who criticized its extremist views – including moderate Muslims like Bukar. When they targeted families, the insurgents sometimes killed the men and spared women and children, and sometimes murdered both parents. Today, thousands of orphaned and fatherless kids roam the streets of Maiduguri, the capital of Borno state, and refugee camps.

The loss plunged Fatima, her five siblings, and her mother – now a single housewife – into grief and destitution.

Then, in 2010, Fatima’s mother learned about a school offering free education to Muslim orphaned children affected by the insurgency. To Fatima’s great joy, the school was just a few miles away – walking distance – and her mother was able to sign her up.

“If I didn’t come to this school, maybe I would have been by the roadside hawking,” Fatima says.

For more than two decades, Mr. Mustapha, a towering man who favors the flowing robes of Egyptian jalabiyahs, was a sharia court lawyer in predominantly Muslim northern Nigeria, where such courts operate alongside a Western-style judiciary. In 2007, disturbed by the number of haggard-looking orphaned children begging on the streets of Maiduguri during school hours, he quit his job to start the foundation. It began as a single building of two classrooms, with 36 pupils and two teachers.

Shortly afterward, Boko Haram’s campaign against education escalated. The group, whose name means “Western education is forbidden” in northern Nigeria’s Hausa language, began detonating bombs and carrying out horrificshootings and assaults on schools. Rights watchers estimate the sect has destroyed or forced the closure of around 2,500 schools in the region, killed 611 teachers, and displaced 19,000 more.

The effect has been devastating in a region that is already Nigeria’s most impoverished. Borno state, which has only a 23% literacy rate, has seen the number of out-of-school children more than triple since 2008 to 1.8 milliontoday.

All this only spurred Mr. Mustapha. After approaching private donors and international humanitarian organizations, he expanded to 40 classrooms spread over four separate community schools. 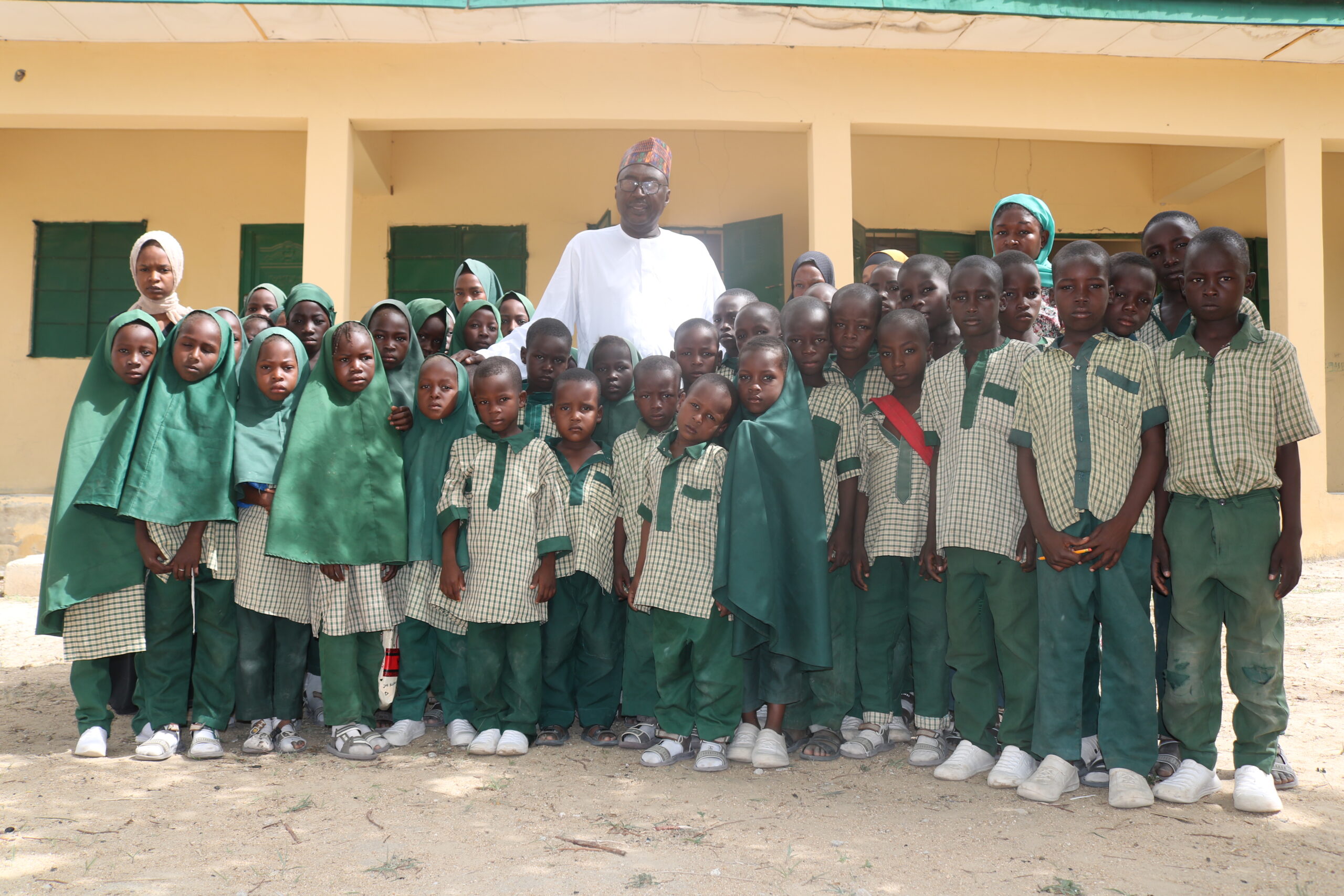 Zannah Mustapha (in white) with teachers and pupils of one of his three primary schools at Allah Karamti community in Maiduguri, Nigeria.

He also began accepting children who had lost parents due to the crisis – regardless of the side for which their parents had fought. The decision sparked criticism and rejection from some parents and community members.

“A lot of these Boko Haram elements were killed. Their wives and children were cast on the street. … Society considered them taboo,” says Mr. Mustapha.

“If I said I’m going to work on orphans, are [Boko Haram members’] children not orphans? Or are we going to [judge] them for the offense of their parents or husbands?”

And Mr. Mustapha’s compassion paid off. While Boko Haram targeted other schools in the state, forcing weekslong closures, it never attacked Mr. Mustapha’s. He was able to offer uninterrupted education to some 2,200 kids even at the height of the insurgency.

Among Fatima’s classmates is Nur, whose father was a soldier. Like her, Nur lost both his father and uncle after they were gunned down by Boko Haram. But at school, both children found a respite from tragedy – happily busy, they rarely had time to think of it, and some of their close friends include children whose fathers were in the sect.

It helps that Mr. Mustapha gives all incoming students psychosocial support before admission – part of that includes encouraging them to see and relate to themselves and each other with love and to avoid discrimination, he says.

But despite his effort to convince some to accept an inclusive approach, he still faces criticism. He says some whisper about his intentions, calling him “Boko Haram lawyer” – a reference to his role as a go-between in securing the release of 103 of the girls Boko Haram abducted in Chibok.

Still, he is undeterred. With support from the International Committee of the Red Cross, Mr. Mustapha also opened a center that trains widows in livelihood skills. Some of them are widows of Boko Haram members.

Meanwhile, Mr. Mustapha receives far more admission requests for his school than he has the capacity to handle. He wants to expand further, but doesn’t have the money.

His greatest pride, he says, comes from seeing the kids happy, especially girls who, as is often the case among impoverished families in northern Nigeria, would likely have been forced into child marriages to bring in a dowry. Instead, those at his school have a chance to chase their dreams.

Click here to read the story on The Christian Science Monitor.

Emmanuel Innocent Eteng is a journalist fellow with the Spiritual Exemplars Project.