Like the tectonic fault lines that can suddenly release pent-up geological pressures, shaking the literal bedrock of Southern California, the cultural fault lines between groups with unequal political and economic power periodically unleash similarly destructive energy. These moments of civil unrest are the inevitable result of increasing inequality, and they shake the foundations of Southern California’s multiethnic landscape.

As we look back over the 30 years between the civil unrest of April 29, 1992 and Los Angeles’ current cultural landscape, three questions are on our minds: What was Los Angeles like in the years leading up to 1992? What lessons can we learn from efforts to rebuild the city? Who are the agents of positive social change today, especially among organizations rooted in LA’s communities of faith?

This kind of inquiry into the origins and outcomes of the 1992 civil unrest marked the beginning of the USC Center for Religion and Civic Culture (CRCC). CRCC traces its roots to the Religion and Civic Order project, an initiative funded by the Los Angeles-based Haynes Foundation. A pair of USC religious studies scholars explored the prominent role of faith leaders in quelling the violence of April 1992 and rebuilding the city in the months and years that followed. “Politics of the Spirit,” the capstone report for the Religion and Civic Order project, also served as the starting point for CRCC. 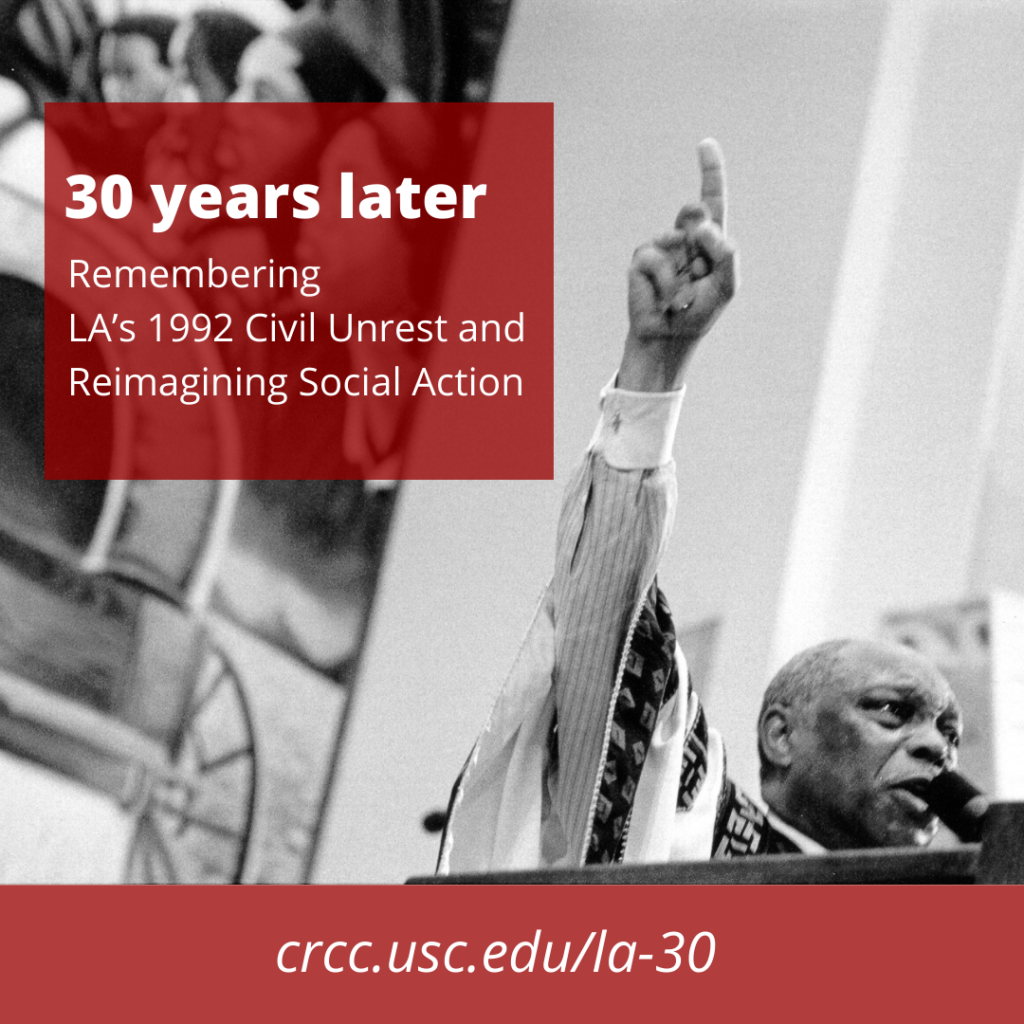 Upon the 30 year anniversary of the civil unrest, this report builds upon both “Politics of the Spirit” and “Forging a New Moral and Political Agenda,” the 20-year follow-up on the Religion and Civil Order project. You will find excerpts that are still relevant today, as well as views on the future of social action in Los Angeles. Navigate the menu to the right or below to read about:

In “Politics of the Spirit,” a Black pastor remarked on the period of time bookended by the Watts Riots of 1965 and the civil unrest of 1992: “The problems are the same, except they’ve gotten worse.”

Three decades later, the problems persist. Systemic racism, coupled with efforts to protect white privilege through denialism and voter suppression, remains endemic in American politics and institutions. At the same time, collective efforts to mitigate these problems have flourished in Southern California and other parts of the country. And while contemporary antiracism coalitions like Black Lives Matter (BLM) and Dignity and Power Now (DPN) are rooted in network- and movement-building strategies that were catalyzed by the civil unrest of 1992, BLM and DPN include a more philosophically and spiritually diverse cohort of activists than the generations of leaders, largely rooted in the Black Church, that rose to prominence from the 1960s to the 1990s.

These connections to the past as well as the increasing diversity of antiracism efforts in the present were apparent in the mostly peaceful nationwide protests that followed the murders of Breonna Taylor by police in Louisville, KY in early 2020 and George Floyd by Minneapolis police in the summer of that year.

All of these developments suggest that future periods of upheaval remain a possibility along Southern California’s (and the nation’s) racial and economic fault lines, though the networks of social justice organizations, civic leaders, philanthropies and corporate stakeholders that have grown since 1992 may mitigate some of the suffering that civil unrest inevitably entails.

What would a true transformation of American society entail? Some of the voices in the last section of this report—The Next Generation: Social Action Today—suggest possible solutions to the problems that have both motivated and frustrated successive generations of social justice activists. The one constant in our history is that if the dream of a society free from racial injustice continues to be deferred to another time, the fires of conflict will almost certainly erupt again.

Next: Read about the beginnings of the 1992 Civil Unrest.

Memories of the Unrest

In 1965, the LAPD’s beating of a Black man—Marquette Frye—unleashed pent-up rage at police brutality and economic injustice in the city’s African American community, sparking the Watts Riots. Burned-out buildings from that ...