A Sociology of Spirituality

A Sociology of Spirituality 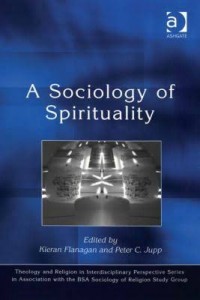 The emergence of spirituality in contemporary culture in holistic forms suggests that organised religions have failed. This thesis is explored and disputed in this book in ways that mark important critical divisions. This is the first collection of essays to assess the significance of spirituality in the sociology of religion.

The authors explore the relationship of spirituality to the visual, individualism, gender, identity politics, education and cultural capital. The relationship between secularisation and spirituality is examined and consideration is given to the significance of Simmel in relation to a sociology of spirituality. Problems of defining spirituality are debated with reference to its expression in the UK, the USA, France and Holland. This timely, original and well structured volume provides undergraduates, postgraduates and researchers with a scholarly appraisal of a phenomenon that can only increase in sociological significance.

CRCC’s Richard Flory and Donald E. Miller co-authored a chapter in the book titled, “The Embodied Spirituality of the Post-Boomer Generations.”

JTA: Flory and Belzer on the Spiritual Lives of Young Jews

Young Jews, age 13-25, are among those who are least likely to be thriving spiritually and religiously, according to a survey conducted by Springtide Research Institute. The Jewish Telegraphic Agency turned to ...
Audio

This radio documentary was originally published by KALW’s The Spiritual Edge, with the support of CRCC’s global project on engaged spirituality. To hear this and other profiles, subscribe to The Spiritual Edge podcast ...
Maria Emilia Martin
Audio

This radio documentary was originally produced by KALW’s The Spiritual Edge, with the support of CRCC’s global project on engaged spirituality.  To hear this and other profiles, subscribe to The Spiritual Edge podcast in ...
Athar Ahmad
Article

Bishop Isaiah: The Bishop, the Art school and the Conflict Zone

This article was originally published on Eurasianet, with the support of CRCC’s global project on engaged spirituality.  In the village of Zemo Nikozi, reminders of the 2008 war are hard to hide. ...
Clément Girardot and Julien Pebrel
Article

This video was originally published by Religion Unplugged, with the support of CRCC’s global project on engaged spirituality. As health care professionals assess the lessons of the COVID-19 global pandemic, one unexpected message ...
Kim Lawton
CRCC in the News

Since 2016, CRCC has shared the trends in religion and society that we see shaping the coming year. What started as light-hearted predictions has grown more ominous over the years. Anybody surprised ...
Read this next

The Intersection of Gender, Nationalism and Faith-based Giving in Sri Lanka

On September 9 2021, the Joint Learning Initiative on Faith and Local Communities (JLI) held a webinar where CRCC’s Nalika Gajaweera presented her paper on the Intersection of gender, nationalism, and faith-based giving ...
Nalika Gajaweera