In this tip sheet, you will discover foundational information to help you interact with Buddhist leaders. It is part of a set of tools and training for FEMA to help disaster response professionals engage with faith communities. Much of the information also can help students, researchers, government agencies, non-profits and businesses learn about and develop relationships with communities. Click here to download the PDF version of this tip sheet. 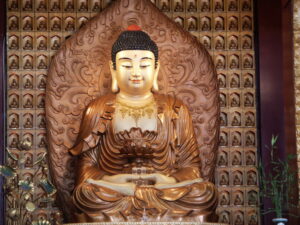 Religion called: Buddhism
Adherents Consider Themselves: Buddhist and are called Buddhists
House of Worship: Temple or community center
First Point of Contact: Temple board of directors or community center executive director
Religious Leader: Abbot, monk, nun, or priest
Spoken Direct Address: Use “Venerable,” “Your Eminence,” or “Rinpoche” depending on branch
Physical Interaction: Do not touch monks/nuns

HOUSE OF WORSHIP
Places of worship or practice may be called (depending on school of Buddhism):

Lay Leaders
Temple Board of Directors: Typically responsible for temple operations including meetings and finances. Many lay Buddhists in the U.S. practice at a community center and not a temple. Some movements such as Soka Gakkai International (SGI) also do not have monks/nuns or temples.

Greeting
When introducing yourself to a religious leader, use formal religious titles unless instructed otherwise (see above).

Putting the palms together in anjali (the gesture of prayer) and bowing the head is a greeting common to all Buddhist traditions. Bowing means paying homage, respect, and honor to monks, nuns, and other spiritual leaders.

Physical Interaction
Buddhist monks and nuns should typically not be touched by laypersons. As a general rule, avoid initiating physical contact when meeting or greeting religious leaders from religious traditions that differ from your own, especially those of the opposite sex. Initiating gestures common in the U.S. such as shaking hands or hugging/embracing may be considered inappropriate or offensive. Be prepared with an alternate gesture, such as anjali/bowing the head.

Most Buddhists do welcome handshakes with an embrace, but preferably between same sexes. When in doubt, ask before making assumptions or wait for a leader to initiate. Monks in certain traditions may initiate, for example, by holding someone’s hand while escorting them through a building or to a speaking position.

When offering food or anything edible to a monk/nun there is a formal method usually involving moving, sliding, or placing food on the table towards the monk/nun so that it does not require the monk/nun to reach out for it first. Monks/nuns may prefer to look down and eat quietly and attentively as opposed to engaging in conversation.

Other
Remove hats and shoes when entering a Buddhist temple’s shrine room. Some Buddhists use the swastika symbol, representing samsara, the endless cycle of birth, death, and rebirth which may be seen at temples or other religious sites. Because Buddhists are not monotheists (many are nontheists), references to God or saying “God bless you” are not appropriate. Ask before participating in worship services.

Scheduling and Holidays
There is no weekly Sabbath to account for when scheduling meetings with Buddhist religious leaders. However, there are many Buddhist holy days held throughout the year. Many celebrate the birthdays of Bodhisattvas (deities) or other significant dates in the Buddhist calendar. The most significant celebration happens every May on the night of the full moon: Buddha Day, a celebration of the birth, enlightenment and death of the historical Buddha over 2,500 years ago.

Food
Buddhist dietary restrictions are structured very differently than those of the Abrahamic (Christian, Jewish and Muslim) religions. There is no such clear distinction between permitted and forbidden foods in Buddhism. Therefore, there is a great deal of diversity in traditional Buddhist practice. It is always best for responders to ask a local Buddhist community about their dietary needs, rather than assume they are vegetarians or that they eat meat. Traditionally, many Buddhists are vegetarians.

Some Buddhists observe a fast on full-moon and new-moon days. On fasting or festival days, a Buddhist might wish to abstain from eating after noon. Theravada nuns and monks, and sometimes other Buddhist monastics, do not eat at all after noon.

Logistics
Generally, Buddhists will be comfortable sharing space with others without requiring much in the way of specific items. Some practitioners may be more comfortable sitting on cushions on the floor rather than Western-style in chairs. Depending on ethnic and cultural origin, it is not uncommon for men and women to congregate by gender for conversation, eating, and socializing.

Buddhist dress is usually a combination of culture and ethnicity, not religious requirement. Typically, Buddhists conform to the clothing styles of country where they live. Lay Buddhists usually do not wear distinctive clothing or haircuts, but sometimes may have stoles, pins, or vestments to denote lay leadership responsibilities within their respective communities. In postdisaster response and recovery settings, a Buddhist person may or may not choose to self-identify. However, recent immigrants as well as Buddhist monks and nuns may wear ethnic clothing or robes, respectively, which will look different depending on region and tradition (may be maroon, saffron, grey, brown, yellow, or black). In addition, in certain traditions, their heads are shaved. Given the geographic origins of Buddhism many adherents are Asian or South Asian. However, Asian or South Asian garb does not necessarily indicate religious observance. For example, Christians, Shinto, Taoists and members of other faith communities from Asia and South Asia may also wear the same/similar ethnic clothing. Buddhist dress does not indicate a person’s level of education or reflect on a particular conservative (or liberal) religious or political orientation. 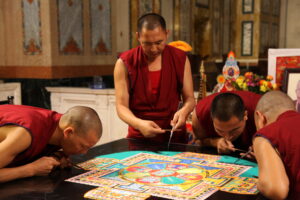 Buddhism is one of the five major world religions, with at least 500 million adherents worldwide. There are 3–4 million Buddhists in the United States (two-thirds of whom are Asian American). Adherents follow the teachings of Siddhārtha Gautama, the historical Buddha (“Awakened One”) who lived in India around the fifth century BCE. He taught four “noble truths”: (1) the truth that life is suffering/anxiety/dissatisfaction/stress; (2) the truth of its cause; (3) the truth of its cessation; and (4) the truth of the path toward its cessation. Typically, three schools of Buddhism are spoken of: the Theravada of South and Southeast Asia, the Mahayana of East Asia, and the Vajrayana of Central Asia—each having many traditions, variations, and communities. The religion is called Buddhism in English, and adherents are Buddhists.

In this tip sheet, you will discover foundational information to help you interact with Black Church Protestant leaders. It is part of a set of tools and training for FEMA to help ...