In this tip sheet, you will discover foundational information to help you interact with Evangelical Megachurch leaders. It is part of a set of tools and training for FEMA to help disaster response professionals engage with faith communities. Much of the information also can help students, researchers, government agencies, non-profits and businesses learn about and develop relationships with communities. Click here for the PDF version of this tip sheet. 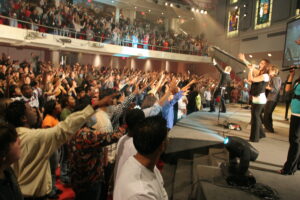 Megachurches are large Protestant Christian congregations with an average of 2,000 or more members in attendance for weekly worship. While megachurches are sometimes located in urban areas, many are in high-traffic suburban spaces and often have large-scale campuses with multiple buildings on dozens or hundreds of acres of land. Some have multiple sites.

National Voluntary Organizations Active in Disaster (NVOAD) is a nonprofit, nonpartisan, membership based organization that serves as the forum where organizations share knowledge and resources throughout the disaster cycle. FEMA DSA team members should check with their VAL to determine whether local or regional VOADs exist in their operational area. Each organization has distinct capabilities. Responders should check with an organization’s local affiliate or with its national office to confirm capacity and activities specific to each disaster situation.

Greeting
When introducing yourself to a religious leader, use formal religious titles unless instructed otherwise (Reverend, Pastor, Dr.).

Physical Interaction
Shaking hands and hugging is common in most Evangelical Christian denominations. 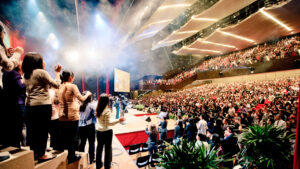 Approximately half of megachurches are non-denominational and half are denominational. Southern Baptist Convention churches make up about 16% of megachurches. When taking into account other networks, fellowships, or associations of churches, the percentage of affiliated megachurches grows to 70%. The remaining 30% are completely free-standing and independent and operate autonomously.

Scheduling and Holidays
Most Evangelicals gather weekly for communal worship involving singing, Bible readings, and a sermon. Many do this on Sunday mornings; a few (e.g. Seventh Day Adventists) meet on Saturday. Many hold mid-week bible study, Saturday and Sunday evening services, and host other events and services throughout the week. Be aware that many pastors take Monday as their day off. Holidays include:

Logistics
The scope of many megachurches’ social media followings and contact lists can be helpful in reaching a large number of disaster survivors spread over a wide geographical area.

ABOUT EVANGELICAL CHRISTIANITY AND MEGACHURCHES

A megachurch is defined as a church having a large Protestant Christian congregation with an average of 2,000 or more members in attendance for worship each week. Other characteristics often include a charismatic, authoritative senior minister, multiple social and outreach ministries, and a very active congregational community. Eighty-two percent have a majority Caucasian congregation. There are more than 1,600 megachurches in the U.S., with the largest concentrations in California, Texas, and Florida (the largest is Lakewood Church in Houston with an average weekly attendance of 43,500 and annual budget of $70 million).

While approximately 71% of megachurches are Evangelical, as an umbrella term, Evangelicalism covers an enormous diversity of denominations and independent churches. The majority of Evangelicals believe:

In this tip sheet, you will discover foundational information to help you interact with Latino Protestant leaders. It is part of a set of tools and training for FEMA to help disaster ...