In this tip sheet, you will discover foundational information to help you interact with Hindu leaders. It is part of a set of tools and training for FEMA to help disaster response professionals engage with faith communities. Much of the information also can help students, researchers, government agencies, non-profits and businesses learn about and develop relationships with communities. Click here to download a PDF of this tip sheet.

Religion Called: Hinduism (or Sanatana Dharma or Vedanta)
Adherents Consider Themselves: Hindu and are called Hindus, or followers of Sanatana Dharma or devotees of a guru
House of Worship: Temple
First Point of Contact: Temple board of directors
Religious Leader: Pandit or Pujari, commonly known in English as “priest”
Spoken Direct Address: Use “Swami” for male priests and “Swamini” for female priests
Physical Interaction: Do not touch priests – optional “Namaste” greeting (see below) 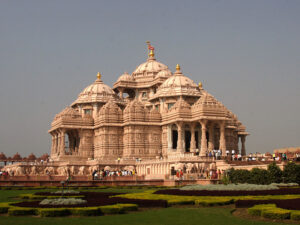 Ordained/Commissioned/Licensed Leaders
In the U.S., a variety of traditional spiritual leadership terms are in use:

Board of Directors: A Hindu temple founder or president of its board of directors may also be considered a religious leader. Many U.S. temples have been founded by women, or have a woman as chief officer. Temples are governed by lay members of their board of directors who retain control over temple operations and finances.

While there are no Hindu NVOAD members, Hindu organizations have been active in disaster relief and recovery. BAPS Charities mobilizes volunteers in post-disaster settings including provision of vegetarian food and other services. Hindu American Seva Communities is another charitable organization that has provided direct relief to disaster-affected individuals. ISKCON Food for Life provides vegan and vegetarian food relief.

Greeting
When introducing yourself to a religious leader, use formal religious titles unless instructed otherwise.

Namaste greeting: Bringing the palms together at chest level (known as Anjali), slightly bowing the head in a humbling and respectful posture, and uttering the reverential salutation Namaste (translated as, “I bow to the divine in you,” in Sanskrit). This greeting is a good non-contact alternative especially when greeting someone of a different gender, age, or social status.

Physical Interaction
As a general rule, avoid initiating physical contact when meeting or greeting religious leaders from religious traditions that differ from your own, especially those of the opposite sex. Initiating gestures common in the U.S. such as shaking hands or hugging/ embracing may be considered inappropriate or offensive. Be prepared with an alternate gesture, such as the respectful “Namaste” greeting. Most Hindus do welcome handshakes with an embrace, but preferably between same sexes. Responders should understand that this is more customary than religious. Therefore, when greeting a Hindu of the opposite gender, one should wait until after the Namaste greeting to see if a hand is offered first before initiating a handshake. As holding hands between people of the same gender is common practice in some countries where Hinduism is prevalent, it would not be uncommon for a leader to hold someone’s hand while escorting them through a building or to a speaking position. When in doubt, ask before making  assumptions or wait for a leader to initiate.

Other
Remove shoes before entering a Hindu home or temple to respect the way that the community treats their home or sacred space. Ask before participating in worship services. 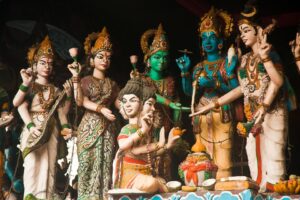 Some U.S. Hindu temples are members of international movements (For example temples affiliated with BAPS or ISKCON). In these cases, a national or international headquarters provides governance and sets policies.

Scheduling and Holidays
Hindu holidays vary, depending on the theological branch in which one participates, whether one’s family is from North India or South India, and whether one belongs to one of the more recent Hindu reform movements. Holidays include: Krishna’s Birthday, Navarati, Vijayadasami, Holi, Diwali, and Ganesha festival.

Food
Vegetarian Food: Traditionally observant Hindus follow a Brahmin (vegetarian) diet in accordance with Hindu tradition. Therefore, many Hindus will only eat food from trusted vegetarian or vegan sources, including caterers, purveyors, and MREs (Meals Ready to Eat). The most orthodox Hindus also avoid onion, garlic, and gelatin byproducts. Fasting is commonplace and frequent, generally lasting just one day or one day a week, in connection with devotion to a particular deity or observance of a particular festival. Fasts may involve abstinence from certain foods only, or total abstinence from food and drink during daylight. Provide vegetarian options if scheduling a meeting where food is provided. In addition, snacks should not contain gelatin, meat, meat byproducts, or lard.

Logistics
Generally, Hindus will be comfortable sharing space with others without requiring much in the way of specific items. Some may be more comfortable sitting on cushions on the floor rather than Western-style in chairs. Depending on ethnic and cultural origin, it is not uncommon for men and women to congregate by gender for conversation, eating, and socializing. Hindus of some ethnic/cultural backgrounds may have a culture of greeting before discussing business. This could include sharing tea, a meal, or engaging in conversation. It may be considered rude to start discussing business without going through these rituals.

In post-disaster settings, a Hindu person may or may not choose to self-identify and, despite common assumptions, their outward dress or appearance may not identify them as Hindu. Moreover, ethnic South Asian garb does not necessarily indicate religious observance. For example, Buddhists, Christians, Muslims, Sikhs, and members of other faith communities from South Asia may also wear the same/similar ethnic clothing. Religious Hindus (especially women) may dress in clothing that may fall outside of American/Western fashion norms. Females may wear a Salwar Kameez (a long shirt and pant set) or Saree (a 6 yard by 44 inch light weight cloth) draped over a draw string ankle length petticoat) and blouse. Hindu dress is usually a combination of culture and ethnicity, not a religious requirement. It is a false assumption that females are forced or required to dress traditionally, and most would be deeply offended by that assumption. Hindu dress does not indicate a person’s level of education or reflect on a particular conservative (or liberal) religious or political orientation.

Note that the male priest conducting religious ceremonies often does not wear a shirt.

Hinduism is the world’s oldest organized religion and the third largest, with an estimated one billion adherents. Approximately 2 million Hindus live in the U.S. and worship at over 1,000 mandirs (Hindu temples). Most American Hindus or their families have immigrated from India since 1965, but there are also Indo-Caribbean Hindus from Guyana and Trinidad and a small but growing number of white Americans and others who have come to Hinduism through ISKCON and/or yoga practice.

Hinduism is not a singular system of beliefs and ideas, but a conglomerate of diverse beliefs and traditions in which the prominent themes include: Dharma (ethics and duties), Samsara (rebirth), Karma (right action), and Moksha (liberation from the cycle of Samsara). Hinduism teaches that there is only one supreme Absolute called “Brahman.” However, it does not advocate the worship of any one particular deity. The gods and goddesses of Hinduism amount to thousands or even millions, all representing the many aspects of Brahman. Therefore, it is characterized by the multiplicity of deities. Fundamental to many Hindus is the Trinity of Brahma, Vishnu, and Shiva—creator, preserver, and destroyer, respectively.

Hindus believe in the Vedic (scriptural) mandate that “Truth is One,” and that the wise may express that truth in different ways. Therefore they believe that all paths to divinity are valid. A Hindu holy book, the Bhagavad Gita, emphasizes one’s duty to family, community, nation and the world in a selfless manner. Although Hinduism has sects, (e.g., Shaivites and Vaishnavites) these differences are not generally relevant in emergency contexts.

In this tip sheet, you will discover foundational information to help you interact with Jewish leaders. It is part of a set of tools and training for FEMA to help disaster response ...