In this tip sheet, you will discover foundational information to help you interact with Orthodox Christian leaders. It is part of a set of tools and training for FEMA to help disaster response professionals engage with faith communities. Much of the information also can help students, researchers, government agencies, non-profits and businesses learn about and develop relationships with communities. Click here for the PDF version of this tip sheet. 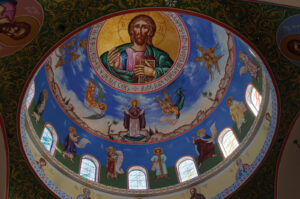 Greeting
When introducing yourself to a religious leader, use formal religious titles unless instructed otherwise. Deacons and Priests: Father. Bishops: Your Grace. Archbishops/Metropolitans: Your Eminence (Your Beatitude for heads of independent Churches, and Your Excellency for Titular Metropolitans).

Physical Interaction
Many Orthodox Christians exchange a “kiss of peace” when greeting those of the same or opposite gender (not expected of non-Orthodox). In Greek and Arab churches a kiss on both cheeks is customary. In Russian churches there are three kisses.

Other
When entering an Orthodox Christian church, cathedral, or other sacred space, shoes are generally left on but men should remove hats or caps. These spaces are considered sacred 24 hours a day – not only when they are being used. Responders should treat sacred spaces with respect and deference and refrain from certain behaviors such as eating, drinking, talking loudly, touching objects, or entering certain areas without permission. Visitors should wear conservative clothing covering the shoulders and knees. Stand when a priest enters the room and remove hats or caps. Ask before participating in worship services and do not take communion unless you are Orthodox Christian. Ushers can help with customs, dress, and etiquette. 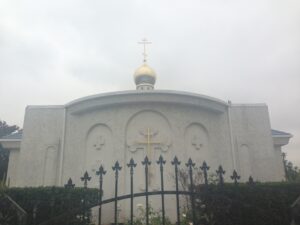 “Orthodox Christianity” includes the Eastern Orthodox Church and Oriental Orthodoxy. In general, governance is hierarchical and Archdioceses, Metropolises, Dioceses are administrative districts led by a bishop who oversees the jurisdiction’s churches.

Scheduling and Holidays
Orthodox Christian churches observe the Lord’s Day (Sunday) with the Divine Liturgy (similar to the Roman Catholic Mass). While all Orthodox Christians celebrate Pascha at the same time, some use the Old Julian calendar (currently 13 days behind).

Food
Many Orthodox Christians fast on Wednesdays and Fridays, plus four extended periods:

Logistics
The senior priest/Pastor of a parish has ultimate authority within the parish on spiritual, financial, and administrative decisions. They may be assisted by a business manager or parish associate who oversees the day-to-day operation of the parish and answers to the Pastor. It is important to foster a relationship and buy-in with the manager, as they often know the inner workings of the parish even if they do not hold the title of authority and power.

Orthodox Christian dress is usually a combination of culture and ethnicity, not religious requirement. While head covering at worship for women is the norm in Orthodox Christianity, it is often dispensed within U.S. parishes. Clergy, monks, and nuns usually wear identifying garb. For clergy: a traditional long black robe (cassock) or a black suit with a black shirt and white circular collar. For monks and nuns: a habit. Clergy don ceremonial clothing when conducting services. Male leaders often wear beards. Clergy sometimes appear in secular settings in street clothes.

“Orthodox” means “correct teaching” or “correct worship.” In the US, adherents originate from dozens of countries including Armenia, Egypt, Eritrea, Ethiopia, Greece, India, Lebanon, Romania, Russia, Serbia, Syria, and Ukraine. Approximately two-thirds of Arab-Americans are Orthodox Christians. The Greek Orthodox Church, the Orthodox Church in America, and the Antiochian Orthodox Church have the most adherents of Orthodox churches in the US. Basic tenets include beliefs in:

In this tip sheet, you will discover foundational information to help you interact with Protestant Christian leaders. It is part of a set of tools and training for FEMA to help disaster ...