In this tip sheet, you will discover foundational information to help you interact with Jewish leaders. It is part of a set of tools and training for FEMA to help disaster response professionals engage with faith communities. Much of the information also can help students, researchers, government agencies, non-profits and businesses learn about and develop relationships with communities. Click here for the PDF version of this tip sheet. 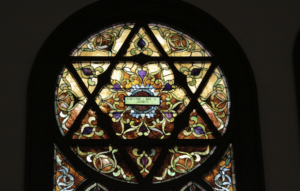 Greeting
When introducing yourself to a religious leader, use formal religious titles unless instructed otherwise (e.g. Rabbi).

Physical Interaction
As a general rule, avoid initiating physical contact when meeting or greeting Orthodox religious leaders. Most Orthodox Jews do not exchange handshakes with or embrace people of the opposite gender, as a gesture of respect and modesty. When greeting a Jewish person of the opposite gender, one should wait until to see if they extend their hand to shake, rather than first extending one’s own. In the Reform, Conservative and Reconstructionist movements a handshake introduction would welcomed. When in doubt, ask before making assumptions or wait for the other person to initiate the greeting. Male disaster response personnel should also never be alone with an Orthodox woman (have other women present).

Other
Male visitors to a synagogue or religious home may be offered or choose to wear a skull cap (yarmulke or kippah), or when visiting religious homes, wear a hat or baseball cap. Ask before participating in worship services. Ushers can help with customs, dress, and etiquette. Jewish homes should not be visited on the Sabbath and the major Jewish Holidays. A Mezuzah on the right side of the front door is the simplest indicator that a Jewish family lives in the house. 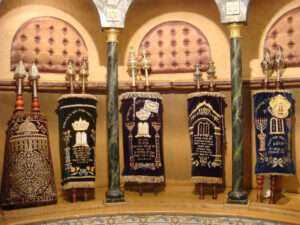 U.S. Judaism is non-hierarchical. There is no Chief Rabbi or in any city within the U.S.

Scheduling and Holidays
Saturday is the Jewish Sabbath (Shabbat in Hebrew and Shabbos in Yiddish), the day of rest. Shabbat is observed from 18 minutes before sunset on Friday evening until approximately 48 minutes after sundown on Saturday or after the last day of one of the holidays listed below. Observance includes attending Services, visiting family and friends, refraining from a range of activities including: using electricity, driving, cooking, carrying objects outside of the home or community boundary if established, showering, traveling, writing, working, and tearing objects. Disaster staff should avoid non-emergency meetings on Saturdays, but note that rabbinic law actually requires people to violate Shabbat to save human lives. Yom Kippur, Rosh Hashanah, Sukkot, Simchat Torah, Passover, and Shavuot are holidays when business activities are prohibited and meetings should be avoided on these days.

Food
Orthodox and many Conservative Jews follow Kosher dietary rules in accordance with Halakha (Jewish law). Most Reform and Reconstructionist Jews do not keep kosher but may choose to avoid eating pork products. Food that is acceptable meets the standards of kashrut (kosher). In Kashrut, meat and dairy products are not served at the same meal. Kosher animals include cows, sheep, goats, chickens, turkeys, ducks and most fish. Reasons for food not being kosher include the presence of ingredients derived from non-kosher animals (pigs, horses, carnivores, shellfish, scavenger fish and birds, etc.) or of kosher animals that were not slaughtered in the ritually proper manner. Other reasons include mixing meat and milk, producing wine or grape juice (or their derivatives) without rabbinic supervision, or cooking with non-Kosher cooking utensils/machinery. Orthodox Jews and many Conservative Jews will only eat food that has been certified by a Nationally recognized Kosher Certification Organization. The four nationally recognized Hechsher (Kosher approval) symbols are: 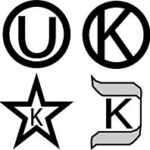 Logistics
Respecting the Sabbath, major Jewish holidays, and keeping the congregation facilities kosher are the most important things to keep in mind when asking for congregation assistance. Bringing Kosher food into a Synagogue must be closely coordinated with the Congregation’s Rabbi. All Kosher food offered must be certified and have an approved Hechsher label on every item.

The capacity to provide disaster assistance (e.g. shelter and/or meals) to displaced people is directly dependent on the resources of each individual congregation; some may have the infrastructure and financial means and some do not. Some larger congregations will also have dining halls or classrooms that can be used as shelters during a disaster; it is be wise to ask for these spaces first instead of sanctuary space.

In post-disaster settings, some Jews may or may not immediately choose to self-identify. Orthodox Males will wear a Kippah or Yarmulke (skullcap) and may be wearing a black hat, baseball cap or some other form of headgear. Most Orthodox males will wear tzitzit (fringes) which may be hanging out of their shirts or they may be tucked into their shirts. Married Orthodox females may be wearing a wig (Sheitel) or other head covering over their hair. Some may wear loose fitting clothing, long skirts and long sleeves that go past the elbow. Orthodox men and women dress modestly as a sign of respect.

Judaism is the first and oldest monotheistic religion. Its origins date back approximately 3,500 years. There are an estimated 13 million Jews living in the world today. Approximately 42% of Jews live in the United States. There are two basic divisions within Judaism: Ashkehnazic (Descendants of Jews from France, Germany and Eastern Europe) and Sephardic (Descendants of Jews from Spain, Portugal, North Africa and the Middle East). Ashkenazi Jews can be further classified further into Orthodox Judaism and into Liberal Judaism. In North America, the four main branches of Judaism are Orthodox, Conservative, Reform, and Reconstructionist:

In this tip sheet, you will discover foundational information to help you interact with Muslim leaders. It is part of a set of tools and training for FEMA to help disaster response ...