In this tip sheet, you will discover foundational information to help you interact with Muslim leaders. It is part of a set of tools and training for FEMA to help disaster response professionals engage with faith communities. Much of the information also can help students, researchers, government agencies, non-profits and businesses learn about and develop relationships with communities. Click here for the PDF version of this tip sheet.

Religion Called: Islam or Al-Islam
Adherents Consider Themselves: Muslim and are called Muslims
House of Worship: Masjid (pronounced “mos-jid” or “mos-jeed”) a.k.a. mosque
First Point of Contact: Usually the masjid board of directors or Imam in some cases
Religious Leader: Imam (pronounced “ih-mom” or ih-mam)
Spoken Direct Address: Use “Imam”
Physical Interaction: Avoid physical contact with those of opposite gender 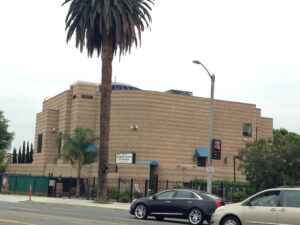 National Voluntary Organizations Active in Disaster (NVOAD) is a nonprofit, nonpartisan, membership based organization that serves as the forum where organizations share knowledge and resources throughout the disaster cycle. FEMA DSA team members should check with their VAL to determine whether local or regional VOADs exist in their operational area. National VOAD members include ICNA Relief USA and Islamic Relief USA.

TIPS FOR CULTURE AND SOCIAL INTERACTION

Greeting
When introducing yourself to a religious leader, use formal religious titles unless instructed otherwise (Brother/Sister, Imam).

Muslims greet one another, and can be greeted by, the Arabic salutation “As-Salamu Alaykum” (peace be upon you), to which the response is ”Wa alaikum assalaam” (And upon you be peace).

Physical Interaction
As a general rule, avoid initiating physical contact when meeting or greeting religious leaders from religious traditions that differ from your own, especially those of the opposite gender. Muslims do not generally exchange handshakes with, or embrace, people of the opposite gender. Staff and other guests should understand that this is not a sign of rudeness, but a cultural and/ or religious custom. Therefore, when greeting a Muslim of the opposite gender, one should wait until or if they extend their hand to shake, rather than first extending one’s own. Be prepared with an alternate gesture, such as placing the right hand on one’s own heart when being introduced. When in doubt, ask before making assumptions or wait for a leader to initiate. As holding hands and kissing cheeks between people of the same gender is common practice in some ethnic and cultural traditions, it would not be uncommon for a leader to hold someone’s hand while escorting them through a building or to a speaking position.

Other
Remove shoes before entering a mosque to respect the way that the community treats their sacred space. Both men and women should dress modestly. Men should wear long pants and women should cover the head, arms and legs. Ask before participating in worship services. 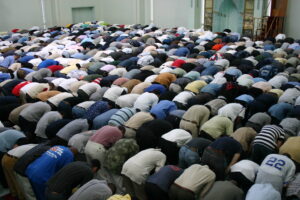 Scheduling and Holidays
Many Muslims observe five daily prayers. While brief (about 5-10 minutes each), these should be considered when scheduling meetings. Special considerations should be taken during the month of Ramadan. Be flexible in meeting scheduling to accommodate adjusted schedules as participants may wake up earlier and/or go to bed later than normal, as well as observe ritual prayer five times per day. Ideally, meetings should be scheduled during the mornings and food should not be served.

Muslims follow a 12-month lunar calendar. Major observances vary by sect or school of thought, and may include: The First of Muharram (celebrated by some branches of the Muslim community; merely noted by others), The Ten Days of Muharram, ‘Ashura (the Tenth of Muharram), Milad al-Nabi (the Prophet’s Birthday), Ramadan/Ramazan: a month of total fasting from food and liquids (and from intercourse and smoking) during daylight hours, Laylat al-Qadir (Night of Power): all-night prayer during Ramadan, Eid al-Fitr (Festival of Fast-Breaking), Eid al-Adha (Festival of Sacrifice).

Food
Halal Food: Many Muslims follow religious dietary laws written in the Quran. These dietary laws are defined by the Arabic terms halal (permitted) and haram (prohibited). In accordance with the Quran, pork and alcohol are examples of items considered to be haram. Therefore, many Muslims will only eat food from halal food sources, including caterers, purveyors, and MREs (Meals Ready to Eat). Halal food sources include meat that has been ritually slaughtered (zabiha). Provide a zabiha/halal option, or, if unavailable, a vegetarian option if scheduling a meeting where food is provided. In addition, snacks should not contain gelatin, meat, meat byproducts, lard, and vanilla or other alcohol-based ingredients.

Ramadan Fast: Muslims often fast from sunrise to sunset during the lunar month of Ramadan, the most sacred month in the Muslim religious calendar. Ramadan, a period of self-reflection and charitable acts or giving, includes ritual prayer, daytime fasting, and communal pre-dawn and sunset meals. During Ramadan, Muslims eat breakfast (suhr/suhoor) before dawn and refrain from eating and/or drinking until sunset.

Logistics
Generally, Muslims will be comfortable sharing space with others without requiring much in the way of specific items, aside from a floor covering during prayer. Some may be more comfortable sitting on cushions on the floor rather than Western-style in chairs. Depending on ethnic and cultural origin, it is not uncommon for men and women to congregate by gender for conversation, eating, and socializing. Some Muslims may have a culture of greeting before discussing business. This could include sharing drinks, a meal, or engaging in conversation. It may be considered rude to start discussing business without first going through these rituals.

Muslims may dress in clothing that may fall outside of American/Western fashion norms. Males may wear a small hat (kufee) or turban. Some may wear long robes (thobes) or a long shirt and pant set (shalvar-kameese). Some males may wear their pant-legs slightly shorter than the standard fashion. Females may wear a head covering (hijab) over their hair, ears, and neck.

Some may cover their entire bodies with loose fitting clothing, covering all of their body, except for their face, feet, and hands, called an abaya. Though not generally common in the United States, some females may veil their faces, using what is called a niqab, wear elbow length gloves, or a burka, if covering the body from head to toe. Islamic dress is usually a combination of culture and ethnicity as much as piety. It is a false assumption that females are forced or required to dress modestly, and most would be deeply offended by that assumption. Islamic dress does not indicate a person’s level of education or reflect on a particular conservative (or liberal) religious or political orientation.

Islam, the world’s second largest religion, has an estimated one and a half billion adherents, from nearly every racial and ethnic background. Between 2-6 million Muslims live in the U.S. and worship at over 2,100 masjids. The population is made up of three major groups: African-Americans, South Asians (including Indians, Pakistanis, and Bangladeshis), and Arabs. There are smaller populations of Latinos, Europeans and Caucasians. Islam, which means “submission to Allah (God),” has five pillars: prayer, fasting, charity, pilgrimage to Mecca, and  testifying on the oneness of Allah and the prophethood of Mohammad. Their holy book, the Quran/Koran speaks of caring for the poor, a day of judgment, and the afterlife. Islam is comprised of two major sects, Sunnis (the majority) and Shiites, and several other smaller sects. The religion is called Islam. “Islamic” is an adjective; adherents are called Muslim.

In this tip sheet, you will discover foundational information to help you interact with Sikh leaders. It is part of a set of tools and training for FEMA to help disaster response ...