In this tip sheet, you will discover foundational information to help you interact with Roman Catholic Christian leaders. It is part of a set of tools and training for FEMA to help disaster response professionals engage with faith communities. Much of the information also can help students, researchers, government agencies, non-profits and businesses learn about and develop relationships with communities. Click here for the PDF version for this tip sheet. 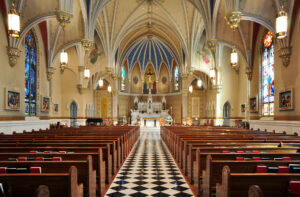 National Voluntary Organizations Active in Disaster (NVOAD) is a nonprofit, nonpartisan, membership-based organization that serves as the forum where organizations share knowledge and resources throughout the disaster cycle. FEMA DSA team members should check with their VAL to determine whether local or regional VOADs exist in their operational area. National VOAD members include:

Physical Interaction
In approaching Roman Catholic leaders, gestures common in the U.S. such as shaking hands are generally acceptable. It is also acceptable for men and women to shake hands. Hugging/embracing are much less common and should be avoided.

Other
When entering a Roman Catholic church, cathedral, basilica or other sacred space, shoes are generally left on but men should remove hats or caps. These spaces are considered sacred 24 hours a day – not only when they are being used. Responders should treat sacred spaces with respect and deference and refrain from certain behaviors such as eating, drinking, talking loudly, touching objects, or entering certain areas without permission. Visitors should wear conservative clothing covering the shoulders and knees. Stand when a priest enters the room and remove hats or caps. Ask before participating in worship services and do not take communion unless you are Roman
Catholic. Ushers can help with customs, dress, and etiquette. 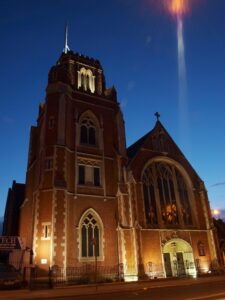 Scheduling and Holidays
Catholic churches observe the Sabbath each week with Masses on Sundays and often on Saturday nights. Avoid scheduling meetings Saturday evenings, Sundays and around the following holidays:

Logistics
The senior priest/Pastor of a parish has ultimate authority within the parish on spiritual, financial, and administrative decisions. They may be assisted by a business manager or parish associate who oversees the day-to-day operation of the parish and answers to the Pastor. It is important to foster a relationship and buy-in with the manager, as they often know the inner workings of the parish even if they do not hold the title of authority and power. The parish secretary is often a key contact.

Roman Catholic dress is usually a combination of culture and ethnicity, not religious requirement. Lay Roman Catholics do not wear distinctive clothing but may wear religious medals or a crucifix on necklaces. When not engaged in a Mass or formal event, Roman Catholic priests, including Bishops and Archbishops, usually wear black pants and dress shirts, with a distinctive white tab collar and sometimes a black suit jacket. During religious events, parish priests normally wear robes called albs, Ushaped sashes worn around the neck called stoles, and sometimes a decorative robe-like outer layer called a chasuble. However, it is not uncommon in some places and situations to see priests in regular street clothing. Some monks and nuns wear distinctive identifying garments (robes and habits).

In the U.S., Roman Catholics make up about 25 percent of the entire population and number about 78.4 million. Although U.S. Roman Catholics come from varying backgrounds, the group increasingly identifies as Latino or Hispanic. As a whole, the Church is experiencing growth in many regions, predominately in the Southwest and West Coast.

Roman Catholicism is a monotheistic Christian religion that believes Jesus Christ – who was both human and God – died to save all people from their sins. Central to the religion is the belief in the Holy Trinity, or the fact that God is omnipresent in three beings – the Father, the Son (Jesus Christ), and the Holy Spirit. Catholics believe that Jesus is the Son of God, conceived by
the power of the Holy Spirit and born to a virgin human mother named Mary. Other key beliefs include:

Click here for the PDF version for this tip sheet.

In this tip sheet, you will discover foundational information to help you interact with Hindu leaders. It is part of a set of tools and training for FEMA to help disaster response ...